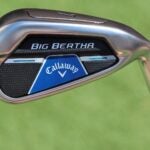 Callaway's new Big Bertha B-21 irons are geared for the high handicap golfer who finds more of the face.

If you’ve picked up a Callaway club in the last few decades, you’ve likely come across an iron with the words “Big Bertha” emblazoned on the head. The name was initially introduced in 1991 with oversized drivers but quickly expanded to include irons three years later offering super-game-improvement traits: a generous profile, wide sole and noticeable offset.

The Big Bertha name remains Callaway’s most iconic club franchise 30 years later, but according to Dr. Alan Hocknell, the company’s SVP of R&D, the look of the iron has changed over the years since it was first established as a technological game-changer in the industry.

“We’ve maybe drifted away from some of the Big Bertha heritage in the last couple of models, where we haven’t had quite the same overt super-game-improvement shape and size of the iron,” Hocknell said. “We haven’t displayed the technology that’s in the iron quite in a way that gives golfers the confidence they need that there’s things working to their advantage in there.

“I think the rest of the market has done that, too. There’s been a sort of general slendering of irons, if you like. Even the max irons available from ourselves and some of our competitors these days are not that large in terms of super-game-improvement features. There’s a great opportunity and hole in the market to reestablish Big Bertha as the leading super-game-improvement iron in the category.”

With the release of Callaway’s new Big Bertha B-21 irons, there’s no questioning where these irons fall on the product spectrum — they are super-game-improvement irons in every sense of the word. Compared to Callaway’s oversized Mavrik Max irons, the Big Bertha B-21 features more offset in the mid and long irons to assist in squaring up the head at impact, and sole widths that are up to 50 percent wider in certain parts of the set for enhanced turf interaction.

“We know we’re targeting advantages for golfers in the market who need the most help,” Hocknell said. “This design can be literally transformation for certain types of golfers.”

Of course, there’s more to Big Bertha B-21 than a generous profile and design. Callaway’s Flash Face Cup design received the Artificial Intelligence treatment to fine-tune the thickness of the structure in specific areas to benefit golfers who don’t consistently find the center of the face. The end result is an aggressive face pattern that produces similar ball speeds across the entire structure, mitigating penalizing misses that usually plague high-handicappers.

“This [face design] looks a lot like what you’ve seen on a driver or fairway wood from us recently,” Hocknell said. “It’s unusually thick and thin in areas, maybe unexpected areas of thick next to thin. This is the AI system driving the design to greater efficiency of ball speed, while still trying to achieve some targets.”

A visible tungsten energy core — located in the sole — adds another layer of forgiveness by positioning more mass behind the lower portion of the hitting area (from heel to toe) to launch the ball high, regardless of where it impacts the face. Housed inside the head, Callaway’s proprietary urethane microspheres are strategically positioned to soak up unwanted vibrations and improve the overall feel at impact, without impacting ball speed.

The 43-degree pitching wedge is identical to Mavrik Max, ensuring a strong launch and comparable distance to other super-game-improvement irons in the market.

Callaway’s Big Bertha B-21 irons retail for $900 (steel; 7-piece set)/$1,000 (graphite; 7-piece set) and will be available Sept. 10 with KBS CT80 steel or Callaway RCH (55/65/75) graphite. The Callaway-designed RCH is an updated design of the popular graphite shaft initially introduced in the mid-90s; the new profile offers an active tip section to assist with a high launch.