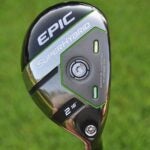 The fall release cycle is the time of the year where Callaway tends to take a few more risks and debut niche products that address the needs of smaller parts of the market. Two years ago it was the original Super Hybrid, a “fully loaded fairway wood” packed inside a hybrid profile that was initially geared for better players.

“There’d been definite evidence in the market feedback from better players that some of our hybrids just didn’t suit them,” said Dr. Alan Hocknell, Callaway’s senior vice president of research and design. “Some of them were moving to utility irons, but those didn’t have the power of a hybrid that they were looking for. They didn’t want the hybrid to go left. They wanted a wood-replacement-type-club. A lot of better players gravitated towards the club’s stronger loft. But we also found another audience there looking for the same characteristics.”

The second iteration, named the Epic Super Hybrid ($399.99), still has the lower handicap range in mind, but with higher lofts now available (24 and 27 degrees), the club becomes an option for even more golfers.

“Maybe not as high head speed a player, but someone looking to replace a 5-wood or longer clubs in and around that part of the bag with those hybrids, because they were very forgiving,” Hocknell continued. “There were cries to expand that concept, and that’s what we’ve chosen to do here.”

The engine behind the club is an Artificial Intelligence-designed titanium Flash Face insert that enhances ball speeds. Callaway’s internal Jailbreak A.I. Velocity Blades connect the Triaxal carbon crown to the titanium body (specifically the sole), and are spread wider apart to allow the face cup to flex more effectively, particularly on the hinge areas at the face-crown and face-sole radius. A slight incline also allows for some horizontal and torsional stiffness for an improved energy transfer.

Utilizing a titanium body and lightweight carbon fiber crown netted an abundance of discretionary weight that was fashioned into 90 grams of tungsten weighting towards the heel and toe. Due to the larger body shape, Callaway engineers were able to custom-shape the weights to the body for an extremely low center of gravity that stabilizes the head while dialing in launch and spin characteristics at the same time. (According to Callaway, the Epic Super Hybrid was longer than the Epic Speed 5-wood during testing.)

Callaway also paid particular attention to the overall shape of the head with each loft. The lower lofts are designed with an amount of camber across the lower leading edge to mimic a fairway wood, a relatively symmetrical heel-to-toe crown and angled toe. As the club transitions into the higher lofts, the head starts to take on an iron-like look with a squarer toe, flatter leading edge and crown that climbs to the peak (more toeward).

“There’s quite a distinct progression of shape from the 16-degree on through to the highest lofts in the mid 20s,” Hocknell said. “I think that’s something that’s a bit of the innovation in this line. Not only does it have all the best of our technologies, but the use of shape in order to create performance has been thought through, in terms of what does the club really need to do for the player.”

The lightweight OptiFit 3 hosel offers numerous settings, making it possible to not only increase the loft by 2 degrees or lower it by 1 degree but also adjust the lie angle to a more upright position for a draw shot shape.