For this LPGA pro, a driver fitting resulted in something more valuable than more distance 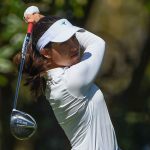 Albane Valenzuela watches her tee shot at the LPGA Gainbridge Championship in February.

Many players who have a clubfitting for the first time are delighted by the fact that dialing in their equipment can generally lead to increased distance — no swing changes necessary.

But for LPGA pro and True Spec ambassador Albane Valenzuela, a recent fitting resulted in something even better than gaining more yards off the tee: increased consistency with her driver. (True Spec and GOLF.com are affiliates of 8AM Golf.)

During a recent interview, Valenzuela said that her fitting showed that her driver wasn’t optimized for her game.

“I was a really good driver of the ball during my amateur career and then last year my driver was just awful,” she said. “I realized it was just not fit for me. It was a draw-biased club. I’m already a drawer. And we just went for a little bit of a shorter club [a TaylorMade SIM Max] that has more of a fade bias. And I just feel so confident with it. I still miss drives from time to time, but I just know if it’s a very narrow tee shot, very under pressure, I can just take my driver anytime.

“It’s just so consistent,” Valenzuela continued. “I’m hitting so many more fairways. And I’m just so excited to hit my driver. It’s my favorite club in the bag. It’s been the best change in my entire bag.”

It appears the change is already paying dividends for Valenzuela. In March, she posted her career-best finish as a professional: a solo fifth-place finish at the LPGA Drive On Championship.

Ready to dial in your own set of clubs? Schedule a fitting with the experts at our sister company, True Spec Golf.