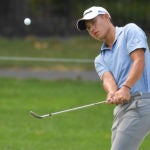 For the most part, golfers understand that fitting is important when it comes to their golf clubs. They know that shafts matter, too, so they look for the flex that suits their swing speed. When it comes to the golf ball, though, it seems most golfers skate right past a fitting and either play whatever ball is cheapest/available, or whatever they’ve always played.

Collin Morikawa’s story about using the wrong golf ball for him, though, might be the inspiration you need to reevaluate the ball you’re using.

As Morikawa explained on our recent Fully Equipped podcast, he switched from a Titleist Pro V1x — the ball he was using when he turned professional — into a TaylorMade TP5x golf ball.

When he switched, Morikawa says he gravitated to the firmer, lower-spinning option from TaylorMade. He essentially assumed that, since he spins the ball enough, the firmer TP5x was the right ball for him. As it turns out, however, Morikawa could have benefitted from further testing.

“I used [a TP5x] through Safeway and Shriners, then realized I wasn’t able to chip,” Morikawa said. “I was trying to scoop the ball and trying to get the ball airborne like a 20-handicap at a country club instead of just hitting chips, because I knew in the back of my mind they just weren’t spinning enough.”

Morikawa wasn’t getting enough spin with his wedges, and it was subconsciously eating away at his technique. He said he liked the performance of the golf ball otherwise, however.

Alas, in search of more wedge spin, Morikawa decided to give the softer, higher-spinning TP5 version a shot. Although he needed to adjust to the softer feel, Morikawa found his fit.

“It took me a week or two to really get used to the feel of the TP5 ball. I had really never used that soft of a ball,” Morikawa said. “It took me a little time, but I’ve gotten used to it now. It feels completely normal. My wedges spin great. It feels great off the putter. I like a soft feel off the putter anyways… it’s just been awesome around the greens, feel, everything; in the wind it’s amazing, too. It’s been a great ball and definitely a great switch. Easy transition to say the least.”

Eventually, after changing over to the softer, higher-spinning, and apparently better-fitting TP5 golf ball, Morikawa won the 2020 Workday Charity Open. I’m not sure about you, but that makes me want to test golf balls to make sure I’m playing the right one for my game.

If you want to hear more from Morikawa regarding his equipment, check out the full interview in the Fully Equipped podcast below.