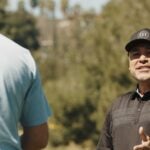 Oscar De La Hoya always tries to give more than he gets.

That was true in his boxing prime, when his combination of speed and power produced 10 world titles and an Olympic gold medal.

And it remains the case outside the ring.

At 47, the championship fighter-turned-fight promoter is also the founder of the Oscar De La Hoya Foundation, a nonprofit dedicated to providing a better life to underprivileged kids and their families in East Los Angeles, where De La Hoya grew up.

We mention De La Hoya here because the Golden Boy, as he’s long been known, is a golf fanatic. He can’t get enough of the game.

What’s more, he’s about to embark on a fundraising initiative — in partnership with leading golf apparel company TravisMathew — that both sides hope will pack a lot of punch. On Monday and Tuesday, Oct. 19 and 20, TravisMathew will hold an online flash sale of its merchandise, with 100 percent of proceeds going toward De La Hoya’s foundation.

“I’m just in awe of the generosity, and thrilled to think of how much good it will do,” De La Hoya told GOLF.com.

“Like Oscar, we have a serious competitive streak,” added TravisMathew CEO Ryan Ellis. “We don’t want to just make a donation. We want to make it the biggest donation his foundation has ever received.”

Load up on TravisMathew in our Pro Shop The fundraising effort is the outgrowth of a relationship that began nearly 10 years ago, when De La Hoya and Ellis crossed paths at a golf resort on the Big Island of Hawaii. At the time, Ellis was a sales manager for TravisMathew. De La Hoya was, well, De La Hoya, a boxing legend on a golf vacation. Ellis was starstruck. He was also struck by De La Hoya’s outfit: the Golden Boy was dressed head-to-toe in TravisMathew apparel.

“What can I say? I’d always been a big fan of the brand,” De La Hoya said. “I had a whole closet filled with their stuff.”

From that first encounter, the two men forged a friendship, which grew organically on the golf course and gave rise to regular conversations about potential business ventures.

“The more we got to know each other, the more we discovered how much we all had in common” Ellis said. “There was a competitive fire at our company, just like Oscar always showed. But also a work hard, play hard mentality, and a commitment to giving back.”

Before the pandemic, plans were in the works for De La Hoya and TravisMathew to co-host a charity golf tournament, with funds earmarked for De La Hoya’s foundation. When global events made that impossible, the two parties pivoted to Plan B.

“Pretty soon it became clear to us that we could raise more through a sale than we could through a tournament,” Ellis said. “Maybe 10 times more. Who knows? Like I said, we’ve got a competitive streak and a commitment to contributing to truly a worthy cause.”

Established in 1995, the Oscar De La Hoya Foundation has had a profound impact on unprivileged communities in East Los Angeles, funding everything from a charter high school to the Cecilia Gonzalez De La Hoya Cancer Center, at White Memorial Medical Center. The center is named in honor of De La Hoya’s mother, who was treated for breast cancer at White Memorial and died shortly before her son won Olympic gold in 1992.

“I always remember the loving care my mother was given by everyone at the hospital,” De La Hoya said.

He also remembers her parting words.

To participate in the TravisMathew flash sale, visit the company’s site on Oct. 19-20.