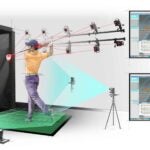 ENSO, a first-of-its-kind system, is making shaft fittings — once a faith-based exercise — a data-driven science.

For years, shaft fittings were not terribly imaginative. Under the supervision of a club fitter, you’d swing a new shaft, see how it performed, then swing another to fix the problems from the previous one. All the while, the questions lingered: Did this solve the problem or did it solve the newest problem?

Eventually, Fujikura, one of the leading shaft manufacturers in the industry, grew tired of running on faith. Years of R&D told them their products delivered for players, and it was time to develop a technology that would do the same without any of the guesswork. Months later, they released ENSO, a first-of-its-kind system built to distill this faith-based exercise down to a science.

As Fujikura says in describing their proprietary technology, “ENSO allows unparalleled insight into the connection between the golf shaft and the golf swing.” Which is why they utilize the system to design their shafts as well as to fit golfers.

That means when you purchase a custom-fit, Fujikura-designed shaft, you’re buying a product that’s been developed based on other golfers who swing the club just like you.

At long last, finding the perfect shaft is easy, fast and based on thousands of data points captured in an instant. Here’s how it works.

To use ENSO, a player hits a handful of shots. In front of them, 10 wall-mounted, super high-definition cameras capture every swing at frame rates higher than 1,000 fps. In general, at least three cameras are focused on every point of the swing. Getting a full picture of the swing doesn’t come cheap — each of these 10 cameras costs north of $25,000.

Dozens of motion-sensing diodes are attached to the grip, clubhead and shaft of the club being tested. These tiny orbs provide ENSO’s cameras with a target to capture movement in space. Crucially, the diodes allow club fitters to isolate the shaft throughout the swing in order to understand which problems are being caused by the shaft and which are being caused by the swing, clubhead or other factors.

Using all of the data accrued by the four components, Fujikura’s software system kicks into gear. The software not only tracks movement along the swing plane, but also helps to provide a clear image of the test shaft’s strengths and weaknesses for the player.

Two cameras (one face on to the golfer and one down the target line) help provide a broader frame of reference. These cameras work in tandem with the motion-capture system to grab an accurate collection of data

This swing monitor, Foresight’s GC Quad, works like a mini-motion-capture system, taking thousands of data points at the moment of impact to track spin rate, smash factor, launch and dozens of other metrics to determine the quality of the swing.

Using the ENSO system, both fitter and player will determine a shaft that works best for their game. One possible selection: the Ventus shaft, which Fujikura says will help boost clubhead performance and improve off-center shots.

Want to really dial in your irons? Schedule a fitting with the experts at 8AM GOLF affiliate, True Spec Golf.

Shop our selection of new grips