How It Works: Why Callaway’s golf-ball production requires high-tech robotics 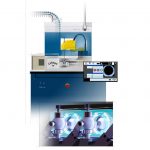 Golf balls and line cooks. Wildly different, you say? Not quite, at least according to the late chef and writer Anthony Bourdain.

“Line cooking — the real business of preparing the food you eat — is more about consistency,” Bourdain wrote. “Mindless, unvarying repetition, the same series of tasks performed over and over and over again in exactly the same way.”

In that sense, the process of creating a golf ball is no different from a line cook whipping up a risotto. If it is to be done right, it must be done consistently. Even the slightest shift in ingredients or placement can cost dearly.

Consistency is king for golf ball producers like Callaway, who have built out multimillion-dollar facilities and staked their reputation on dependability. It’s a good thing, then, that Callaway’s line cook is a high-tech robot.

Callaway’s X-ray machine has a simple and crucial job: uniformity. This piece of equipment is responsible for ensuring every Chrome Soft ball performs the same, and a high-speed vision system ensures every ball looks the same. Here’s a look at how the sausage is made.

After making their way through Callaway’s manufacturing line, Chrome Soft cores are funneled onto a conveyor and brought down into the X-ray machine.

From here, the cores are fed underneath a black box that houses Callaway’s proprietary X-ray technology. X-ray images are taken of each core with the goal of measuring concentricity, or the centeredness of the components inside the core. In order for each ball to perform consistently when it is used by the consumer, it is critical to have as little variance as possible between the cores.

Once the cores are scanned, they are sorted by an electronic arm created by Fanuc Robotics. Cores that pass inspection are moved on to the next step in the production line while those that fail are sorted out.

Images from each core are projected onto a monitor, where a high-powered computer can quickly measure the concentricity and ensure each core is being properly measured and sorted.

After concentricity testing, a mantle and polyurethane cover are applied over the outer core layer. The balls are then sent through a “high-speed vision section,” in which every ball is inspected for cosmetic defects. The ones that pass are sent off to painting, where they undergo one final quality check before they’re shipped.