In the market for custom-built clubs? Fairway Jockey provides a professional — and personal — touch 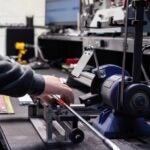 There are a thousand variations of “two-kinds-of-people-in-the-world” expressions.

For golfers, one of the most common is “those who buy clubs off-the-rack, and those who get custom-tailored.” Plenty of players are content with stock, standard clubs, but more serious sticks demand, well, serious sticks that are truly made-to-measure.

Increasingly, that latter group is turning to Fairway Jockey, a Scottsdale, Ariz.-based online boutique retailer of custom-club builds as well as aftermarket shafts and components. The company’s momentum in the past year has seen traffic to its site soar by 800 percent. Much of this growth can be attributed to the fact that Fairway Jockey, founded in 2017, is the only outfit of its kind where consumers can consult with a club-fitter before ordering, with all equipment still offered at MAP (minimum advertised pricing ) — that, and the fact that Fairway Jockey employs only master builders to piece together its bespoke clubs.

Fairway Jockey’s builders undergo rigorous training before they earn their wings and start work in the company’s state-of-the-art 20,000-square-foot shop. Before being hired, they’ve met equipment companies’ manifold qualifications; they have built, and continue to build, clubs for elite Tour pros. Custom-building is their full-time job, not a side hustle.

The awareness of custom-fitting’s benefits has been on the rise for some time, as have sales of custom-fit clubs; lately, however, there has been a trend toward getting fit and then heading elsewhere to have the clubs actually built. This can be a wise move — after all, a racecar driver rarely makes the best mechanic, right? Just because someone can determine the specs for the perfect set doesn’t mean he or she is equipped to build them perfectly, too.

So, where to turn? Definitely not to tiny outfits that implore you to “CALL FOR PRICING!” These gray-market operators try to compete on cost by finagling discounts on services that aren’t up to snuff (or aren’t even performed despite their promises) done by underqualified builders and lacking rigorous quality control. Going to the manufacturers themselves to fulfill an order is an option but still carries potential pitfalls, never mind that, unlike Fairway Jockey, they generally stock only a limited variety of custom aftermarket shafts.

There’s a difference between assembly-line and personalized-craftsmanship business models. An OEM might build upward of a thousand sets a day, while Fairway Jockey might build 10. Instead of clubs being passed through many sets of hands, at Fairway Jockey there’s one person following your clubs throughout the day or several days of the process, from grip to clubhead.

As a result, in a Fairway Jockey build nothing ever gets lost in translation, nothing is assumed to have been done that maybe wasn’t, no technical specs fall through the cracks during a handoff from one task to the next. Impeccable attention to detail means super-tight tolerances, with precise swingweights, lofts and lies, so every club performs exactly as it was intended to.

That’s something every kind of golfer wants, and deserves.

Click or tap here to learn more about Fairway Jockey.