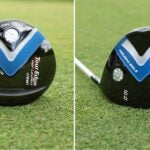 The proliferation of drivers with different spin, launch and internal weight configurations has made it easier than ever to find something that brings out the best parts of your game — while mitigating those round-crushing misses at the same time. Tour Edge’s Hot Launch C521 and E521 drivers are the latest examples.

The Hot Launch C521 and E521 are built for the game-improvement golfer who needs mishit protection and some launch assistance. But instead of simply creating a one-size-fits-all game-improvement model, Tour Edge designers chose to create two unique profiles.

“What we’ve found is that the game improvement market falls into two distinct categories,” said Tour Edge President and master club designed David Glod. “One side for players who want extreme ease of use and launch to the maximum degree and those who want the benefits of game improvement clubs, but with classic head shapes.”

The “C” in the Hot Launch C521 driver ($229.99; 9.5, 10.5 and 12 degrees) stands for “Competition Spec.” The C Series offers ample forgiveness in a more traditional profile with minimal offset for golfers on the higher end of the swing speed spectrum.

The 460cc head features 39 different thick and thin diamond patterns, or “mini trampolines,” behind the face that are designed to retain ball speeds on mishits while negating unwanted spin at the same time. A version of the diamond face design was most recently found on the company’s Exotics EXS 220 driver.

“To be able to take an amazing innovation like Diamond Face that changed the level of what we produced with Exotics EXS and to be able to bring it over to Hot Launch is a huge deal for the performance characteristics of these clubs,” said Glod.

A new rear weight pushes the club’s center of gravity 12 percent lower and 7 percent farther back than the previous Hot Launch 4. The new weight location gives C521 a 20 percent improvement in the stability department over its predecessor, in addition to a towering launch angle.

The overall aerodynamics of the head were also improved through a sloped crown design that greatly reduces drag on the forged four-piece 6-4 titanium head. Particular attention was also paid to the sound at impact with the help of internal acoustic ribs.

And for golfers who continually miss shots low on the face, a 25 percent deeper channel in the sole delivers a combination of improved weight distribution, face flexing and forgiveness.

If Tour Edge’s C521 is geared for the traditionalist, the E521 driver ($229.99; 10.5, 12.5, and 15 degrees) has the high handicapper in mind. The shallow-faced “Extreme Spec” — 11 percent lower than C521 — is built to tame a noticeable slice with aggressive offset and draw-biased weighting in the heel. Stretching the size of the head to the USGA legal limits (front-back and heel-toe lengths) also ensures a more-than-generous face for maximum forgiveness.

Harry Houdini isn’t on the payroll at Tour Edge, but he’d likely be impressed by the company’s latest design to conceal mass. The “Houdini Sole” consists of an area of mass situated on the extreme trailing edge of the sole, along with the curved leading edge under the face, that allowed designers to strategically place extra mass low and deep in the head for an optimized launch with even more forgiveness.

Compared to Hot Launch 4, the CG placement of E521 is 14 percent lower and 10 percent farther back. These are numbers that trump anything Tour Edge has ever produced. The end result is a slice-busting design with a soaring launch that should appeal to golfers who are looking to gain some carry distance and keep their misses on the map.