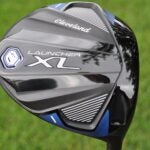 Mention the name “Launcher” to a diehard golfer and you’re bound to get a smile and a nod of approval.

Cleveland’s original Launcher Titanium made a splash more than two decades ago when Vijay Singh used the driver to win back-to-back tournaments on the European Tour. Known for launching the ball high — as the name implies — the generous deep-face profile also allowed golfers like Singh to swing with reckless abandon and not worry about penalizing contact.

The driver’s DNA hasn’t changed much over the years.

The latest edition, Launcher XL ($400; 9.5, 10.5, 12 degrees), is built around the same generous profile with a front-to-back that was extended by 6.7 percent for an increase of 11 percent in Moment of Inertia (MOI), a measure of forgiveness in the equipment industry. According to Cleveland, the longer profile allowed engineers to lower the center of gravity for a higher overall launch, which resulted in a 27 percent “tighter dispersion” area when compared to its predecessor.

“The Launcher XL drivers hit the ball long and straight – plain and simple,” said Jeff Brunski, Cleveland’s VP of R&D. “This is the most forgiving driver line we’ve ever made. More than anything, you’re going to see straighter drives more often.”

The driver also incorporates the same rebound frame as the Srixon ZX Series for a consistent transfer of power to the face. The rigid reinforced frame enhances the spring-like effect of the face across the entire structure via alternating layers of flexible and firm sections in the head.

An adjustable hosel makes it possible to alter launch angle and shot shape with 12 potential loft positions. The standard Launcher XL head also comes with Action Mass CB — an 8-gram weight housed inside the grip that’s designed to reduce swing weight and assist in squaring up the face for improved accuracy and control.

In addition to the standard head, Launcher XL will be offered in a Lite ($350; 10.5, 12 degrees) version — as well as a 10.5-degree draw-biased head — that’s 12 grams less in overall weight. Reducing the weight of the club should make it easier for golfers to generate increased speed during the swing. To save as much mass as possible, a bonded, non-adjustable hosel was also added to the Lite head.