Why Bryson DeChambeau is using a 4.8-degree driver(!) at the Presidents Cup 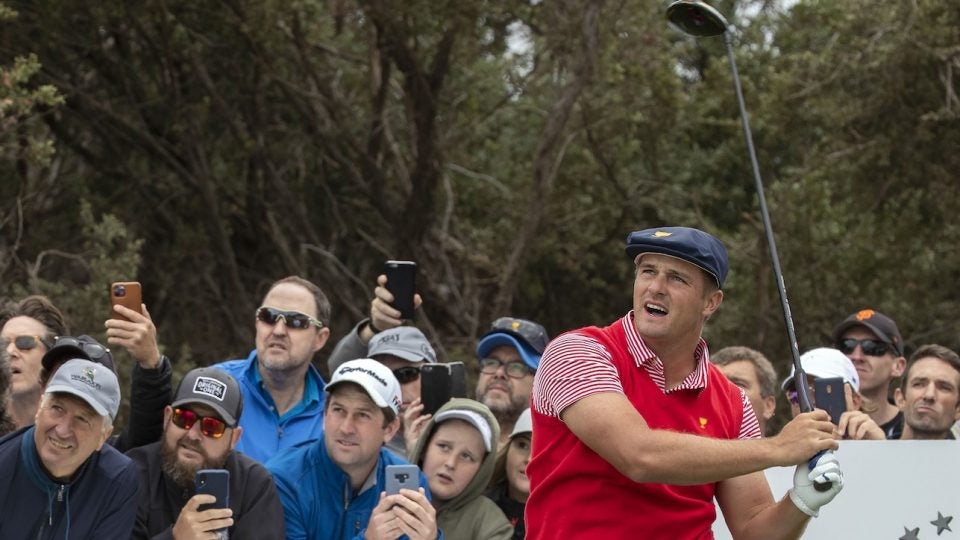 With a beefed up physique, Bryson DeChambeau is on a mission to chase distance — only it’s not the kind of length you’ll find on the PGA Tour. DeChambeau has his sights set on a much loftier target: World Long Drive champion Kyle Berkshire and his 150-plus mph clubhead speed.

“How amazing would it be to rein that in?” DeChambeau told Golfweek’s Adam Schupak recently. “That’s Happy Gilmore stuff.”

DeChambeau offered a glimpse at his new-found length earlier this week at the Presidents Cup when he had to receive permission to keep pounding driver after clearing the back net on multiple occasions. It’s roughly 310 yards to clear the netting.

Adding muscle and strength can help any golfer gain distance. But in DeChambeau’s case, it’s only part of the equation.

DeChambeau also made a tweak to his Cobra King SpeedZone driver in advance of the biennial matches at Royal Melbourne, dropping the loft from a 6.5 degrees to a long drive-esque 4.8 degrees. With his swing speed now topping out at 125 mph — he’s already picked up 15 yards off the tee this season — DeChambeau found even 6.5 degrees to be too much, especially on mishits that repeatedly hit a spin rate of 3,000 rpm’s.

With new “old” swing changes in place, DeChambeau realized he needed to go down in loft to optimize launch and spin, which is now hovering around 2,000 to 2,300 on good drives. DeChambeau’s angle of attack and how he delivers club to ball are unique to his swing, which is partly why he can take advantage of a driver with sub-5 degrees of loft and still maintain an optimal launch and spin rate.

The setup works for DeChambeau, but just like the long drive professionals who use 50-inch shafts and driver heads with 5 degrees of loft, the setup isn’t ideal for a large majority of amateur golfers who are far more likely to find success with a loft around 10 degrees. Heck, even Dustin Johnson uses a driver with 10.5 degrees of loft.

So sit back and enjoy the long drive show DeChambeau puts on this week. Just don’t get any ideas and go mad scientist in an attempt to be more like Bryson.