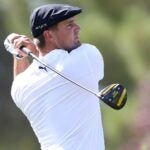 Bryson DeChambeau is quickly become a gear trendsetter on Tour.

Phil Mickelson isn’t the only pro who believes Bryson DeChambeau could be onto something with his audacious plan to potentially put a 48-inch driver in play at the Masters. As DeChambeau recorded an astonishing carry distance of 403.1 yards at his home in Dallas, Mickelson and others in the field at the Zozo Championship were embracing the reigning U.S. Open champion’s setup.

“Now that guys are hitting it in the 180-mile-an-hour, ball speeds are getting pushed to go to the 190s because of Bryson and a lot of guys have to do that to keep up,” Mickelson said.

And then there’s Kramer Hickok, who’s reportedly testing a 48-inch Callaway driver that could go in play at the Bermuda Championship. Hickok saw a head speed increase of 7 mph during testing with a minimal decrease in dispersion. It’s the kind of combination that could make the driver a viable option this week.

As far as the results on the course for Mickelson and Frittelli, it was a mixed bag off the tee. Mickelson struggled to get anything going with the driver, ranking near the bottom of the field in Strokes Gained: Off-the-Tee (minus-8.000) and driving accuracy (59.62 percent). However, he did record the second-longest drive of the week at 355 yards. Frittelli, on the other hand, finished T11 while ranking T8 in the field in driving distance.

It’s unclear if either player will employ the same driver setup at the Masters, but with DeChambeau’s continued effort to widen the distance gap on Tour, you can be certain it will get a hard look before it winds up on the cutting room floor.

Tiger Woods is tough on fairway woods. If it doesn’t offer a level of versatility and workability that trumps his current gamer, it doesn’t make the cut. Period. It’s one of the reasons why Woods waited until November to officially give TaylorMade’s SIM 3-wood the green light.

The SIM fairway finally bumped M5 from the bag after Woods picked up an additional 10 yards off the tee during testing. He also found it easier to work the ball in both directions — a trait he’s required from every fairway wood since turning pro.

Woods added a Mitsubishi Diamana+ 70TX shaft (42.5 inches) and had the adjustable sleeve moved down to 14 degrees (actual loft) for a slightly more penetrating flight.

Iron maker Grindworks has been busy working on a set of blades for Patrick Reed. In addition to the PR-101A model Reed has been playing since last year, GOLF’s Andrew Tursky spotted a PR-202 in the bag as well, which prompted some questions about the iron’s backstory.

According to Grindworks CEO Kiyonari Niimi, the 3- and 4-iron they’ve developed with Reed’s feedback helps negate the left miss: “As for the PR-202, it is a cavity back iron made at Patrick’s request. He has used Titleist T-100 3-iron in the past, but he wanted more accuracy when he hits knockdown/stinger shots, and to ensure the ball doesn’t go left. Also, he wanted a 3-iron that can lift the ball easily.

“Countering the hook is not as simple as pushing the center of gravity toward the toe in an attempt to minimize over rotation, but also focusing on the shape of the head, as well as face progression/offset, toe and heel grind, and more. We worked on creating an iron that not only had a stable center of gravity but a grind that allowed the iron to interact cleanly with the turf, keeping the head as square as possible at impact.”