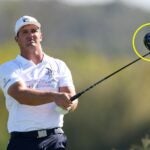 TaylorMade and Callaway aren’t the only manufacturers debuting new drivers at the Sentry Tournament of Champions. Bryson DeChambeau was also seen testing a new Cobra prototype on Wednesday that recently surfaced on the USGA’s list of conforming driver heads.

Going strictly off the images on the USGA’s website, the driver DeChambeau is wielding is called “LTDx LS.” The “LS” likely stands for low spin, which would make sense for a guy who continually lives around 190-200 mph in the ball speed department and needs to corral spin.

In a video on his YouTube page, DeChambeau went through testing with a prototype driver back in November at Dallas National where he touched 208 mph ball speed. He would obliterate that number a month later in Arizona, at a Cobra event, as he surpassed 221 mph ball speed for the first time with a prototype head.

“It’s not the right loft yet,” DeChambeau says in the video while hitting the prototype, “but that was 200 mph [ball speed] without even trying. I even mis-hit it a little low on the face.”

Based on the work DeChambeau has been conducting behind the scenes with this “Cobra prototype,” it’s safe to assume LTDx LS is the mystery driver. The head features two ports near the face with different numbers lasered on the weights to alter shot shape, depending on where the heavier weight is located. If, say, two 10-gram weights could be added, that would make it easier to help lower spin as well.

An LTDx version is also listed on the conforming head list, but the sole only features a single weight port situated along the back — a location that historically generates high launch and stability.

DeChambeau has bounced between Cobra drivers over the last few years and relied on an older model Ltd head — which was released in 2015 — for stretches last season. The sight of DeChambeau taking cuts with the new prototype is a good sign for Cobra as they prepare to launch a new product line in the not-too-distant future.