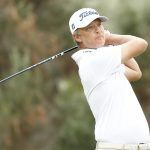 Matt Jones made some key tweaks to his driver setup.

Making equipment changes is often a game of sacrifice. For example, you can use a lighter or longer driver setup that provides more distance off the tee, but you may give up some accuracy. On the flip side, you can find a more forgiving driver head that allows you to hit more fairways, but you may give up a touch of distance to do it.

Matt Jones, winner of the 2021 Honda Classic, however, has found a new driver setup that provides both more distance and more accuracy. In other words, he found the holy grail of drivers.

For Jones, as he explained on our recent Fully Equipped podcast, it was a two-pronged approach that involved changing both the driver head and the shaft.

First off, Jones switched into the Titleist TSi2 model head, which is a slightly more forgiving option than the TSi3 head that’s gained tremendous popularity on Tour since its introduction. The TSi2 version provides more forgiveness due to a fixed weight in the back portion of the head; Jones finds the overall shape and performance to suit his needs.

The driver head, though, is just half the story.

Thanks to Bryson DeChambeau’s declaration that he’d be testing 48-inch drivers following his 2020 U.S. Open victory, driver length has been a hot topic in the golf world. In response, many golfers, including Dustin Johnson, Phil Mickelson, Viktor Hovland, and Jones himself, began experimenting with longer driver shafts to pick up speed.

After conducting his own testing, Jones switched into a 46-inch Fujikura Ventus Blue 7X shaft, which is 1-inch longer than his previous builds. As he explains on the podcast, Jones did pick up speed with the longer shaft, but it also helped create more spin that allowed him to increase carry distance and accuracy. The new setup has been a game-changer for Jones.

“I’ve been able to take on some yardages and carries that I normally wouldn’t have been able to,” Jones said. “It’s been a big boost to my driving performance. My accuracy and distance. That’s a big help out there on Tour.”

While the current USGA Rules allow golfers to go as long as 48 inches, Jones found his sweet spot to be 46 inches, one more inch than before.

“I’m not sure if going to 47 would be worthwhile,” Jones said. “There’s a point of diminishing return when you get too long because then you lose accuracy. I’m not going to push it any further. I’m very happy with what I’ve gained. If I want to gain anything else, I’ll have to do it with improving my body or my swing technique. I have it right where I want it to be. I’m very comfortable with the accuracy that I have with the driver, and the distance that I have.” Certainly, longer driver setups aren’t for everyone. As Jones discussed, the more you increase length, the greater risk you have of missing the center of the face. Using a more forgiving driver head, however, such as the TSi2 that Jones employs, can help offset mishits and help you realize distance increases without giving up accuracy.

Personally, I recommend getting with a trusted fitter, or your local professional, to conduct your own experiments with longer driver shafts. Try a number of different head models and shaft lengths until you find the right combination of distance and accuracy for your game.

A longer shaft and a forgiving head have worked wonders for Jones. Now, your job is to find the right driver setup for you.

Fully Equipped mailbag: What's the best club to use if your putter is damaged?