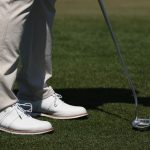 Reducing the actual loft on the putter is a common adjustment for a firm and fast Augusta.

The Masters is the only major championship played at the same course each year, which gives those players who’ve made the trip around Augusta National on multiple occasions a distinct advantage. It’s easier to navigate a course when you know every nook and cranny. And when you know every nook and cranny, chances are you might find that the same equipment you use on regular basis isn’t ideal for the firm-and-fast setup typically found at the Masters.

Here’s a look at the five equipment changes players tend to make to tackle Augusta National.

A strong short game is a requirement at Augusta National — if you want to contend. The shaved areas around the green require surgical precision to get up and down, and many players feel a lob wedge with less bounce makes it easier to get the leading edge underneath the ball from extremely tight lies.

Low bounce options tend to be the most difficult wedges to use, but also offer the greatest amount of shotmaking versatility. Tour players tend to favor low bounce wedges on firm courses to hit a variety of shots, including high, open-faced lob shots from practically anywhere around the green. When played with a square face angle, a low-bounce wedge has little to no room for error, but when struck correctly tends to produce cleaner hits with less debris between the clubface and the golf ball.

Along with manipulating the bounce, many players will put in a fresh set of wedges that provide extra spin around the green. While some will opt for a completely new set, most tend to change out just the sand wedge and lob wedge.

Justin Thomas, for example, has learned over the years that spin is an important alley on the course with specific wedges. It’s one of the reasons why he’s more prone to change out his 57-degree Vokey SM8 and 60.5-degree Vokey WedgeWorks wedges on a frequent basis.

Instead of adding fresh wedges the week of the Masters, most break in the grooves several weeks ahead of time to ensure they have the optimal amount of zip. It also gives players a chance to make sure the sole is entering the turf correctly at impact.

Augusta National is a quintessential second-shot course. For many players in this week’s field, that means having the correct equipment setup for not only the approach shots into the par 4s but risk/reward par 5s as well. Having a fairway wood you can launch into the air and land softly on the putting surface increases your chances of making an eagle on holes 2, 13 and 15.

The most common swap is replacing a 3-iron with a 5-wood or even a 7-wood — a club that was part of Dustin Johnson’s setup when he won the Masters last year.

One would think you’d need more wedges to navigate the course, but some of the game’s best have actually found a higher-lofted fairway wood or long iron to be a better option, Lee Westwood included. Instead of sticking with his usual four-wedge Ping setup, Westwood prefers to shake things up at Augusta and go with just three scoring clubs.

“You don’t typically get a lot of shots from 90 to 140 yards at Augusta,” Westwood told GOLF.com, “so what’s the point in carrying four wedges? I’m more likely to need a 5-wood into 15 or into 2. Or a hybrid or 3-iron into 13 because I can’t quite get it around the corner like the other guys.”

The greens at Augusta National are some of the fastest on the planet. A firm, speedy putting surface typically requires less loft to get the ball out of its minuscule depression and rolling towards the hole, which is why you’ll see players go from 3 or 4 degrees of loft down to 2 degrees.

Getting the ball on the ground sooner produces a truer, more consistent roll on fast greens. It’s the exact opposite on slower greens — think the Open Championship — where more loft gets the ball airborne for a fraction of a second and rolling on the correct line with a consistent pace.

For more on the latest gear news, check out our latest Fully Equipped podcast below.