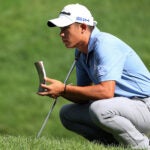 There are two important things junior golfers can learn from Collin Morikawa.

There’s not many people on the planet who know Collin Morikawa’s golf game quite like Ryan Ressa. As the manager of player development for TaylorMade, Ressa has been Morikawa’s club fitter for over a decade now. Ressa has seen Morikawa come up through the ranks of junior golf and into major championship history, so he knows what it takes to achieve the dreams of a junior golfer.

Recently, on our latest Fully Equipped podcast, we asked Ressa about his advice for junior golfers who want to follow in Morikawa’s footsteps. The world of junior golf can be an intimidating and confusing place, and it’s easy to compare yourself to your contemporaries. Hopefully, Ressa’s advice can help you center your focus and achieve your goals.

Here are two important tips for junior golfers, from the man who has fit Morikawa into his golf equipment for years.

1. Have weekly, monthly and yearly plans

While Morikawa doesn’t necessarily set “goals” for himself, Ressa says that Morikawa and his coach Rick Sessinghaus develop plans for Morikawa for a given week, month and year. Then, Morikawa sticks to those plans with independence and without deviation.

For junior golfers who struggle to focus during practice sessions, workouts, practice rounds or tournaments, it can be helpful to set forth plans ahead of time and not waver from them.

Ressa says: “His process when doing things and his independence in doing things, as a junior, as a college player … the guy owned his system. Whatever that was, however he does things, he owned it and he worked on it everyday. You always hear about the process, and getting better, but Collin is the epitome of that, and he won’t deviate from what his plan is. He and his coach Rick are really diligent at kind of laying out a plan for the week, for the month, for the year, and he sticks to it. He doesn’t let anything allow him to deviate from what they set forth. They have a game plan every week. And we at TaylorMade work with him and his coach analytically, helping him plan out the golf course. Then they take that to the practice rounds and plan together and they just go and do it.”

2. Go out and compete instead of constantly searching for new equipment

It can be easy to fall into the trap of changing and testing equipment often, chasing improvements to your game. Of course, club fitting and finding the right equipment are important, but don’t get so caught up in tweaking your clubs that you forget to compete. You don’t necessarily need the perfect equipment to win.

Ressa says: “You see a lot of juniors kind of searching for new things, trying a lot of clubs … but the guys I’ve seen who have been the most successful when it relates to equipment, they just take whatever they have and they go play. That’s what Collin did … he didn’t tweak a lot in college. He didn’t tweak a lot as a junior. He would come down to the Kingdom in January and get fit and then he’d just go play. Some of the other kids you see that struggle, they might ask for new stuff all the time, or cycle through a bunch … versus just going and playing golf and trying to compete … it’s kind of the old school [way of thinking]; whatever clubs I have, the shaft might not be perfect, but I’m going go hit the shot. That’s kind of refreshing to see.”

For more from Ressa and the rest of the latest Fully Equipped podcast episode, tune in below!