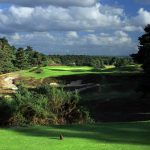 H.S. Colt’s 99-year-old companion to its charming elder, the Old, stands on its own merits. In fact, some golfers prefer the more muscular New Course to the Old. Heathland golf around London is famous for all sorts of reasons but the strength of its par-5s isn’t one of them. Two of the New’s par-5s — the 6th and 13th — are exceptions and anchor each nine. Additionally, the best par-3 at the club is found on the New (its 5th, which plays from high point to high point across a heath-laden shallow valley). The par-4s run the full gamut, from the beefy 4th that rewards a fade off the tee and a draw for an approach to the sub-400 yard gem 12th, which plays to a plateau green. (Photo: David Cannon/Getty)