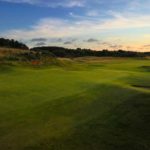 Many consider this links to be the “fairest” Open rota course as most of the holes roll through valleys and the number of blind shots are few, despite the course being set in towering dunes. Peter Thomson won the first Open played here, in 1954, and Birkdale has staged nine other editions, most recently Jordan Spieth’s remarkable win in 2017. (Photo: Kevin Murray)