How Arnold Palmer’s 1961 win at Royal Birkdale took the Open, and Arnie, to new heights

The 1961 British Open at Royal Birkdale, on the west coast of England, began on July 9, 1960, in St. Andrews, Scotland. The ’60 Open came 100 years after the first Open, and it was Arnold Palmer’s inaugural appearance in golf’s oldest championship. With a local caddie, Tip Anderson, on his bag, Arnold finished one shot behind the winner, Kel Nagle of Australia.

Maybe that was for the best. The British galleries fell for Arnold, and he fell for them, for their grand championship — and for links golf. (It suited him, with his ability to hit line-drive tee shots and irons.) By July 1961, Palmer had already won the U.S. Open. He had already won twice at Augusta. The PGA Championship was a nice event, but the Open was the one he wanted. He had vowed, to himself and to others, that he would come back and get it. If you want to get a sense of the playing conditions at Birkdale in 1961, the first thing to do is look at the few brief black-and-white clips from it floating around the internet. The caddies and spectators are wearing long topcoats on the final round of the event, played on a Saturday. The cold wind will come right off your screen and hit you in the face. Your next step is to read the SI account of the event, written with magnificent insight and style by Henry Longhurst, the erudite Englishman who for decades covered golf for the BBC and London’s august Sunday Times. Longhurst captures the appalling weather, the language, the mood of the day and the sounds of that championship. Clearly smitten with Palmer, Longhurst wrote, “Scorning any temptation to try and steer the ball safely down the narrow fairways, he gave it all he had, occasionally grunting with effort as he struck a shot.”

Even in the clips — more gray, really, than black-and-white — Palmer’s seaside magnetism comes shining through. He wears no hat (it was a day for ski hats) and his clothes are trim (the pants of the other players billow in the wind). In victory — yes, he won, by a shot over Dai Rees of Wales — he doesn’t break down and sob or raise his hands to the heavens. He manfully shakes the hands of his playing partners, finds Winnie and walks through a massive throng to the awards ceremony.

It is also incredibly telling to see how Palmer responded to a rules issue that came up in his second round. This is from Longhurst’s account, describing the second round:

“Palmer birdied four of the first six holes and finished with an excellent 73. Morally speaking, it was a 72. On the 16th hole — a 510-yard par 5, which harassed him throughout the championship — he hit a very long drive. But his five-iron approach failed to hold the green, bouncing into a small sand trap. ‘It was nothing serious,’ said Palmer later. ‘An easy shot.’ But three-quarters of the way through his downswing, the wind blew the ball backward. He hit squarely on it, blasting it over the green.

Following the wonderful ethic of golf, Palmer immediately reported to an official that his ball had moved. He was told there would likely be no penalty because he had done nothing to cause the ball to move. However, the rule is quite clear on this point, and Palmer later had to add a stroke for his misfortune, ending up with a 7 instead of a 6.”

Do you think it’s possible that anybody other than Palmer saw that ball makes its fractional movement? Not likely.

A year later, Palmer won his second and last Open, at Troon. That was Jack Nicklaus’s first British Open. Gary Player was in the field, too, so it was the first Open with all three of the Big Three in it. Throughout the 1960s, the importance of the British Open to American players only increased. When Palmer won the 1961 Open at Birkdale, the winner’s share was 1,400 pounds. When Lee Trevino won it there a decade later, the first-place prize was 5,500 pounds. Arnold had something to do with that. The winner this year will be paid $1.8 million. (The R&A is now using U.S. dollars to describe player winnings.) The winner still gets one-year custody of the claret jug, the one with Palmer’s name on it twice. 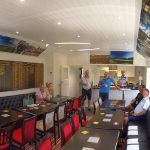 You may also like Inside the Birkdale Artisans Club, where golf-loving laborers trade their skills for tee times

When an old English gent handed the jug to Arnold in ’61, Palmer said, “Oh, beautiful, sir. Thank you. This is very, very lovely.”

“I haven’t given you the check!” the British gent said cheerfully.

He wanted the money, of course. But he knew having his name on that jug was going to be far more valuable to him, in ways that can be counted, and ways that cannot.