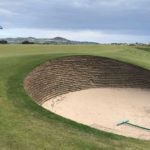 On approach to the Dublin airport, keep your eyes peeled out the window for a glimpse of the most romantic location for a golf course imaginable. Yes, that would be Portmarnock, set among low dunes at the end of a peninsula. The sense of seclusion is palpable, even though you are only 7 miles as the crow flies from a bustling capital city. Seve Ballesteros, Bernhard Langer and Ian Woosnam are among those who won Irish Opens here. Arnold Palmer once tabbed the 15th as one of golf’s best par-3s and yet the other par-3 on that side (the shorter 12th) is just as good. Be prepared for some of the fastest, purest running conditions that the game offers. Also, don’t miss its third nine, the Yellow Nine. (Photo: Courtesy Portmarnock)