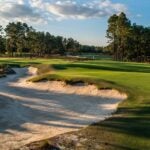 Donald Ross’s chef d’oeuvre rolls spaciously through tall longleaf pines in the Carolina Sandhills with holes culminating with legendary inverted-saucer greens. For the 2014 U.S. Open, a Coore-Crenshaw restoration brought back the tawny-edged fairways and native areas last seen in the 1940s. Even with no rough, the runner-up could muster only one under par over four rounds. After the Women’s U.S. Open was played the following week, a powerful message had been broadcast around the world from the home of American golf about the virtues of width, short grass and great greens. This is one of a handful of courses that presents resort guests with a fun test on which they won’t lose a single ball, and a week later, can be ready to host a U.S. Open. That’s the flexibility of short grass — and Ross’s design genius. (Photo: Joann Dost)