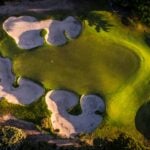 Dan Soutar, Mick Morcom and Alister MacKenzie each played a key role in creating a visual feast and a strategic masterpiece, helped in large measure by the site’s critical virtue of being located on sandy soil. Any modern architect should spend time here, studying how its creators teased so much from land that is neither rambunctious nor expansive. It’s no wonder this course is a darling among design aficionados. (Photo: Airswing Media)