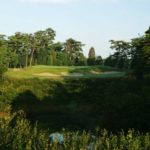 The Japanese had never seen the kind of deep, strategically placed bunkers that architect C.H. Alison introduced to Hirono in the early 1930s, so similar traps built on any course since are known as “Alisons.” Originally, the course bore a sandy, scrubby appearance, but heavy tree planting changed Hirono’s character over the years. Ebert’s restoration efforts have just been unveiled and once again, sand is a dominant theme. (Up 1)