A view of the Tom Doak-designed Pacific Dunes in Bandon, Ore.

1. Routing has been called “the hidden art” of golf-course architecture. Are there any golden rules of routing? Absolute no-nos? Any hard lessons you’ve learned in your own career about what to do (or not do) when routing a course?

Tom Doak (Panelist since 1983; has played 97 of the World Top 100; author of the forthcoming book on routing, Getting To 18): In general, I feel that others’ rules for golf design were made to be broken, but one absolute no-no for me is to build a dogleg hole with another golf hole on the inside of it. I managed to win the job at Stonewall in Pennsylvania many years ago by remarking how people would inevitably short-cut their planned 18th hole by going down the 10th fairway, which they had not noticed. But then I made the same mistake in our redesign of Atlantic City Country Club, extending the 10th hole into a par-5, which meant that going down the fairway of the 9th would be an attractive option to some. Just try telling people not to take advantage of a short-cut in a casino town! Never again…

Jim Urbina (Panelist since 2015; has played 69 of the World Top 100): In his book, Golf Architecture, Alister MacKenzie described 13 rules to follow when designing and building a golf course; he broke every rule. Several hard lessons to learn. When someone says, “Build me a championship golf course,” the golf course should be hard but fair and the golf course should have a balanced scorecard. These are a few examples that stifle the designer. These demands hamper the creative process when trying to find the best holes on any given property.

The great architect George Thomas had this to say about the planning of a golf course: “The greatest care must be taken to secure the full value, with the least congestion, moderate expense in construction and other necessary fundamentals. The proper solution is much on the order of a chess problem; the first effort is not generally the best. … Slopes, hills, mounds or any other contour which affect the roll or run of the ball, are aids on all parts of your fairway and your strategy should, if possible, hinge on them.”

These are lessons that you learn to observe when routing a golf course.

Brian Curley (Panelist since 2011; has played 65 of the World Top 100): I think it is like the game of baseball. On one hand, it is quite complicated, but on the other, so simple. Never be afraid to break the rules, however. There are numerous factors but I have found your first instinct seems to always be best. In my past dealings in Asia, we often would be asked to give an initial impression of a property (often very severe ones) and I would offer up a quick, “Here’s something for ya” kind of plan to get our foot in the door. Months later, after little or no response, they would come back and say “OK, we are ready to go,” and the plan had been submitted, approved as drawn and with strict limitations for any change. I was amazed how often these were fine as is and required nothing but the next step. Obviously, sites vary dramatically, public vs. private matters, and just the impact of walking vs. cart paths impacts decision-making. But I tend to start with the path of least resistance in terms of proper width and line of sight. On great sites, you tend to work from greensites backwards. On severe sites there is a hunt for adequate landing areas and friendly grades. I have also been much more open to the opinions of operators who focus on pace of play, especially getting players out at the start.

In terms of breaking the rules of routing, Cypress has back-to-back 5s, back-to-back 3s … yet it is the best golf experience in the world. 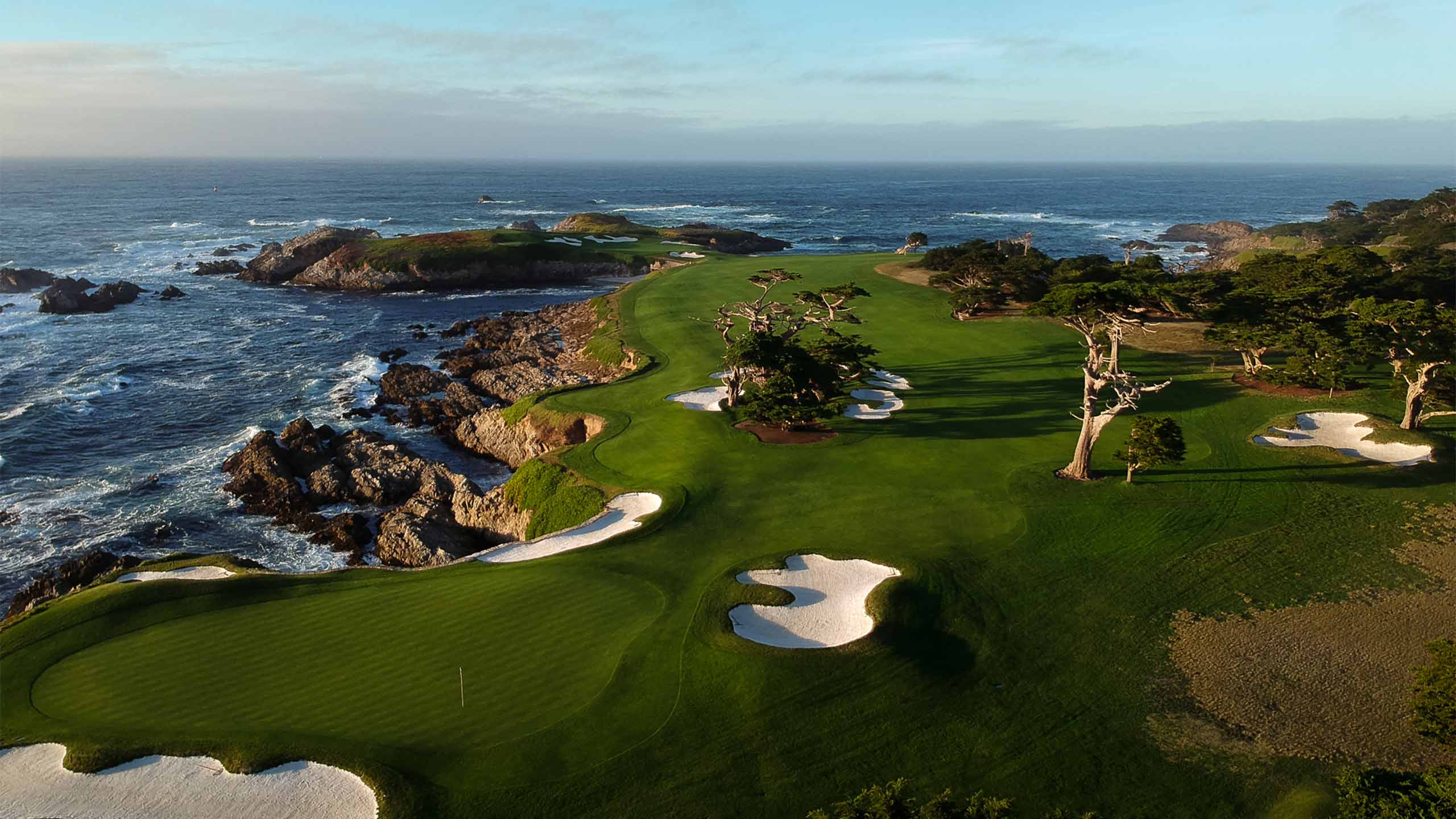 2. For all those armchair architects out there who think, “I could do THAT,” what are some of the biggest challenges of routing that might not be obvious to the outside observer?

Doak: When people tell me one of my holes would have been better had I located the green or tee differently, I think, sure, but what about the holes that come before and after? The routing is a puzzle and it’s important that the pieces fit together well. When we are honing in on the final plan, anytime we consider tweaking a hole, it’s two or three holes that will be affected, because you can’t knock over one domino without hitting another. (Well, I suppose you can if you want a 100-yard cart ride from each green to the next tee, but I hate that sort of arrangement.) The other two fundamentals of routing are trying to plan the fairways around areas where drainage collects, and maintaining visibility from tee to fairway to green, two things that most amateurs don’t even think about until they run into trouble.

Urbina: Linking the best holes together so that they flow, making sure the routing is cost effective, navigating do-not-touch-areas and, most importantly, the walkability of the routing. A.W. Tillinghast said this about course layout: “A round of golf should present 18 inspirations — not necessarily thrills, because spectacular holes may be overdone. Every hole may be constructed to provide charm without being obtrusive with it. … If his round ends happily, this is one beautiful course. Such is human nature.” The outside observer should be careful not to overwhelm the golfer on every tee box with difficult holes. Never force a hole for the sake of the scorecard.

Curley: Don’t get too hung up on the scorecard and by all means try to use the routing as the first tool to create variety in design. Look for natural holes as much as possible but, at the same time, do not be afraid to move dirt if you must. Grades must be lived with for the life of the course but nips and tucks can change initial designs (many great courses have done so over the years but few have made drastic grade changes). Find the great opportunities but don’t shy away from an occasional breather hole. Find the great natural par-3 but remember (as Pete Dye told me) you can always put a par-3 anywhere.

3. What’s an example of a masterful routing?

Doak: Cypress Point is famous for how it goes through the dunes into the trees, back out into the dunes for the 8th and 9th, back into the trees again at 10 and 11, and then out across the dunes to the ocean. At Pacific Dunes I tried to mimic that. Many people have noted how the holes along the ocean aren’t at the end of each nine, but interspersed through the round so you never know when to expect them. But, the other great feature of the property was the bowl of sand dunes in the center, which gave me places for four great short par-4 holes, but I didn’t want to use them all consecutively. So, you play the first and second holes in the bowl, then you head to the ocean for 3-4-5, come back into the bowl for the 6th-7th-8th, head to the ocean again (twice), and come back through the bowl one last time at the short par-4 16th.

Where the terrain was relatively flat and boring, we built our longer holes, including three of the par-5s (the 3rd, 12th and 15th). Each of them starts with a tee in the dunes, and ends with a green either at the foot of the dunes or just up in them. In between, there’s not more than three feet of elevation change along the way, but each of them gives you bunkers crowding the direct line of play either on the tee shot or the second shot, so no one ever complains of them being dull.

Urbina: One of my favorite routings is Riviera Golf Club in California. The first hole on the front nine starts out to the east, holes 2-5 circle back toward the west and southwest. Over the next four holes, directions change three times. The back nine starts off to the south and swings through multiple compass changes, finishing to the northeast on the famous 18th hole that goes uphill. The looping of the routing and the constant change in wind direction is always challenging the golfer. It is a fabulous George Thomas routing.

Curley: Having grown up just a couple of par-5s away, I am a huge Cypress Point fan and always find reason to note its greatness. In terms of breaking the rules of routing, Cypress has back-to-back 5s, back-to-back 3s, is an uneven 37-35, and you tee off over 17-Mile Drive to start. Yet it is the best golf experience in the world. Much of the greatness stems from having a walking-only, no-continuous cart path design. The magic of the center dune (which functions like the hub on a wheel with holes playing in and out) would never have the same charm if cart paths were required.