What is a Biarritz? And how can identifying one help your game?

Welcome to A Beginner’s Guide to Golf Course Design, where we dig into the history, design and meaning of golf course architecture terms you’ve probably heard before but might not fully understand. We’ll explain all of the above in an accessible Q&A format, and better yet, teach you how to identify these features and plan your attack for the next time you see one, saving you strokes along the way. In this installment, we’re breaking down a Biarritz.

Okay let’s start from the top, what’s that word?

Biarritz is actually a city. It’s a seaside tourist destination in southwestern France, drawing visitors for its gambling scene and beautiful surf. It looks like a lovely place to stay. Casinos, beaches, and good golf. Is Biarritz the French word for heaven?

France is cool, but what does it have to do with golf?

Well, while CB Macdonald got most of his template ideas from the British Isles, the Biarritz is the exception. This one he actually found at Biarritz Le Phare, the golf course in this coastal town, built by Willie Dunn Jr. While the hole its modeled after no longer exists (hotel construction and World War II got in the way) the wild green design lives on.

The “chasm” hole, the original third at Biarritz, was a dramatic one, likely why it became infamous in the first place. The tee box was on a high cliff, some 80 feet high and the shot was played over the Bay of Biscay to a lower cliff 50 feet above the water on the other side. The carry over the water was over 150 yards. The green was bordered on each side by a long and narrow bunker running from the front to the back.

Travel
What is a ‘Short’ hole, plus how identifying one can help your game

So are they all dramatic holes playing over water from cliffs?

Unfortunately, no. The main portion of the original Biarritz that Macdonald held onto was the large swale in the green. As time has gone on, this has continued to be its great identifying feature. The Biarritz green is large mostly flat, except for a huge moat running through the middle from left to right. On the original, it is likely that only the back portion beyond the gully ever had pin placements, the front portion being a short fringe approach area. It is amazing to think how just one feature of a green can so drastically change the strategy and how a hole is played.

As long as I stay away from the gully, I’m good?

The genius of a Biarritz is that pin location completely changes the hole from day to day. The large greens are full of pinnable area, each with its own unique challenges. But the three distinct areas are the front, back, and in the swale.

Golf is at its most fun and exciting when the ball is rolling. There is so much drama when you play a Biarritz. Watching the ball in the air and hoping that you found the right distance to be on the correct side of the swale is intense. But even more fun is when the ball hits the ground. If the green is firm, you can be in for all sorts of trouble. Biarritz holes often have longer yardage, forcing players to consider how much the ball will roll when it reaches the green.

Anytime you end up on the wrong side of the swale (which is much more likely with firm conditions) you are in for a difficult putt.

News
If you build it: Jack Nicklaus’ design legacy is rooted in its evolution

Is there anything I should keep in mind if I’m playing one of these?

If you are trying to keep your scores low, consider the conditions of the greens earlier in the round. If they are playing fast and firm as intended, this might affect what type of shot shape you want to hit, or the height. For example, to get to a pin behind the swale without going over the back, you might want to hit a low shot and try to let the ball roll from the front of the green, through the gully, to the back. To keep the ball in front of the swale, playing a high fade might be your best shot, as it will roll out less.

In some instances, the front section is not actually part of the green, but closely mown fringe. This was interesting when players didn’t hit the ball as high or long, forcing them to land it in the correct spot and hope to see it reappear on the other side of the swale. However, the hole often plays as more interesting now when both sides are pinnable, giving the hole more variety.

Even if you hit a great tee shot, it’s worth your time to drop another ball and try putting through the drop bisecting the green. It’s one of the most fun shots you can imagine in golf. 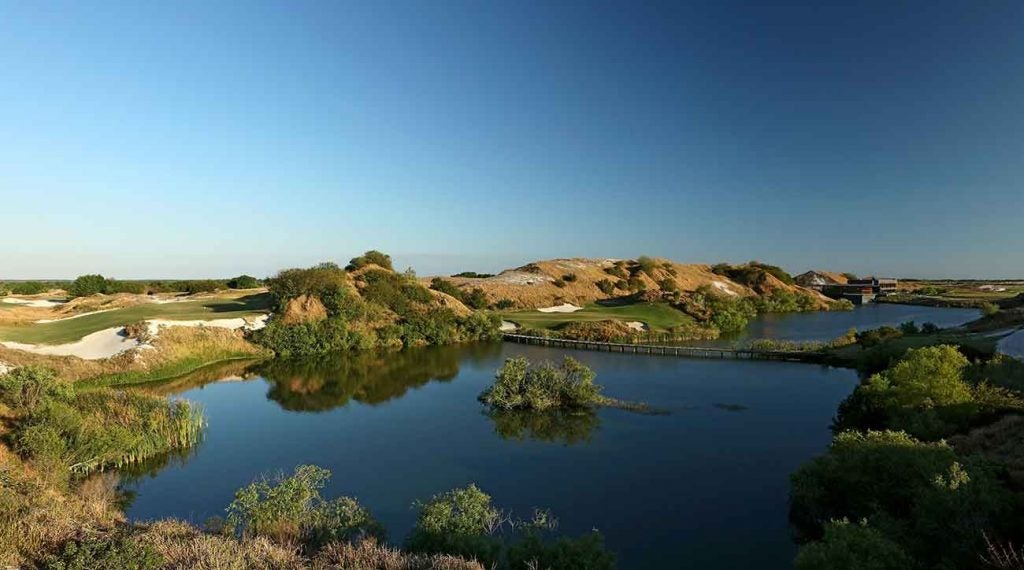 The par-3 16th hole at Streamsong Red is a modern example of a Biarritz design.
Getty Images

I haven’t seen one of these, where can I find one?

A modern take on the Biarritz can be found on the Streamsong Red course designed by Bill Coore and Ben Crenshaw. The hole plays 184 yards and the green itself is 70 yards deep. Playing over water and some daunting bunkers, this hole fits beautifully into the natural topography of the land.

The Course at Yale- 9th hole

One of the best examples is the 9th hole at Yale. While the hole originally had an approach area in front of the swale, it has since been modified to be all green, sixty-four yards deep in total. Playing 213 from the back tees over water, the Yale Biarritz is one of the most iconic in the world.

A longer par-3 with lots of movement and undulation in the green. This hole was clearly inspired by the Biarritz template, but doesn’t stick strictly to those of the past. Ending up in this swale will leave you with a difficult putt as on any other Biarritz style green.

The 227-yard 9th hole at Piping Rock is a doozy. Here, the portion in front of the gully is a tight chipping area and most of the green is surrounded by bunkers. The hole plays slightly downhill, giving you a view from the tee of the challenge lying ahead. 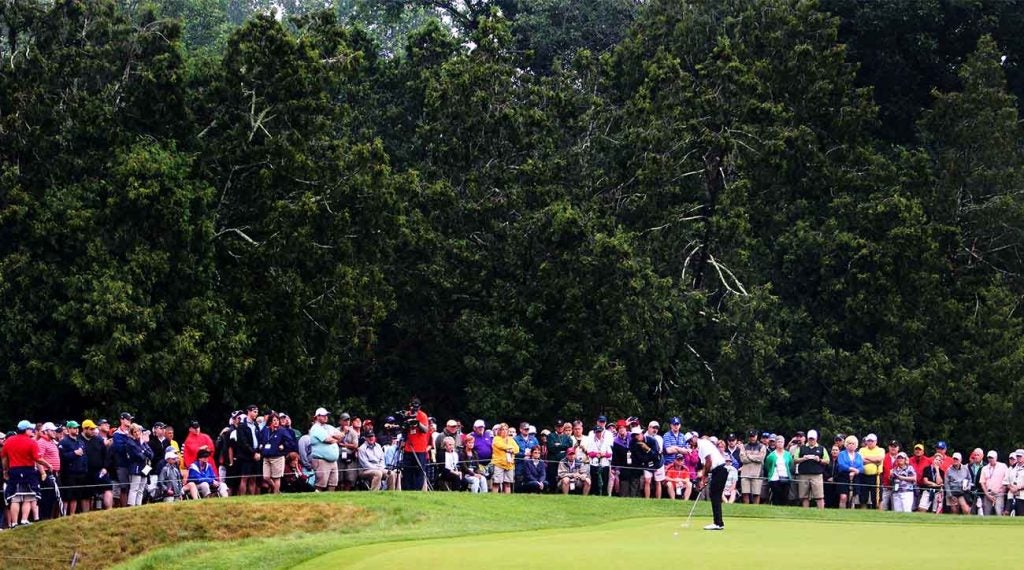 Tour players see one traditional Biarritz a year when they stop at Old White TPC for A Military Tribute at the Greenbriar. The par-3 third hole is an early-round test. The swale is severe enough that if players end up on the wrong side of it, they will have one of their more difficult putts of the year.

A stout 235-yard test, Charles Banks built something special here. Banks took what he learned from Macdonald and Raynor and put his own spin on this Biarritz. It has the traditional strip bunkers up the sides, but he supersized the swale. The swale is so large that you can actually switch it up and place the days pin location in the swale itself. Banks also added a Raynor-esque thumbprint to each portion of the green to add intrigue.

Nebraska’s newest gift from the golf gods, Landmand, is a course of biblical proportions