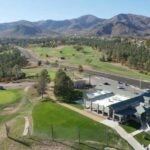 As courses close and frigid temps settle in, December can often seem like the most ominous golf month of the year. And icy conditions aside, nothing has been colder than golf’s evaluation in annual municipal budgets in recent years, often debated in the calendar’s final month.

Should we sell the golf course(s)?

How many years have the golf courses been in the red?

Is there something better we could do with this land?

They’re paraphrased questions but they represent a lot of what parks departments, course advisory boards and local government committees discussed in the mid- to late-2010s. Golf had receded away from its Tiger Boom over 15 years. For munis, December was always a time of existential doom.

But December 2021 isn’t that way. In December 2021, the outlook for munis suddenly feels quite good. Norwich Golf Club in Connecticut saw revenues increase 15% in 2020. The municipal governing body then set an adjusted, reasonable revenue target for 2021, and the course eclipsed that by 17%. December has become a month for announcing gains at Norwich, and they’re now looking at what can be improved by using those funds in 2022.

Last week, the company that manages White Deer Golf Course in Pennsylvania cut a check for $25,000 and delivered it to a Lycoming County Commissioners meeting. The Williamsport muni had reached a self-sustaining level of operations and were now giving back to the county. Surplus profit at a muni. What a thought!

Sherrill Park Golf Course, a muni just north of Dallas, has seen a 28% increase in rounds played over the last two years. They’re turning that into an improved drainage system and facility renovations. We haven’t worked hard to cherry-pick happy 2021 muni stories — these are just announcements we at Muni Monday HQ have seen in the last 10 days.

Municipal courses are, in many ways, the lifeblood of this game. They exist to provide for the customer rather than profit. When Marysville Golf Course in Michigan recently proposed a modest, 3% hike on its memberships, council members asked a simple question. “Is 3% enough?” Would we be better off with a bigger increase? “It’s enough to get things done,” said Mark Thompson, according to local newspaper The Voice. “We had a good year in calendar 2021. Three percent will hopefully be enough to have another good year in 2022.”

When the other local courses in Rockford, Ill. were closed in early December, Swanhills was open for play. Temps were up, players showed up. Two hundred and thirty-two of them! And thus December 2nd — a Thursday! — became Swanhills’ biggest day of the year, earning a headline in the Rockford Register Star. The late-season infusion helped make 2021 the best year the course had seen in over a decade.

We can think of the “Covid Boom” that golf has witnessed the last 20 months game as a nice boost for a sport that badly needed it. But now that it has spanned two full seasons of play, it might be time we think of it as an example of a virtuous microeconomic cycle, too. On a basic level, the more you peg it at a golf course, the more improvements that course can make on its own, thus making the golf experience better for players.

Los Alamos County Golf Course is a great example. Just over 19,000 people live in Los Alamos County, just north of Albuquerque, New Mexico. They’ve got one municipal course, and it has been starved for improvements for years. Great news: it’s getting those improvements, too! Money has been earmarked for a major overhaul of the irrigation system and a refined driving range — but the government approval process is a slow one. Those plans have been researched for years. Course operators have made three different presentations about it just this year alone.

But what’s the quickest way to get improvements approved and actually completed at a muni? “One of the things they’ll look at first is ‘Well, what have you been showing us lately as far as your numbers?’” said Mike Lippiatt, course manager at LACGC. “‘What’s your revenue look like? What are your rounds? What’s your user count? Things like that.

“When we see the type of increases that we realized this past year, we are in a whole lot better position to receive things on your wish list.” Sounds simple and straightforward, business-wise. If your rounds are down and your numbers aren’t positive, well, you’ve likely seen that story play out on your own local muni over the past decade. The wish list grows and is never prioritized.

LACGC runs on a fiscal year of July-June, which meant Lippiatt’s most recent ‘numbers’ did not include the Covid shutdown the entire country of golf courses experienced between March 2020 and May. In other words, this past fiscal year at LACGC was all gravy, baby! And it led to Lippiatt successfully campaigning for three tiny, but vital changes: an automated range ball dispenser, a handicap-compliant golf cart and an update to its fiber optic infrastructure for the maintenance staff. The latter of the bunch replaced an outdated system and will help them care for the course conditions more efficiently.

These sort of improvements might not stand out. They won’t headline the course’s website. They might not impact the rounds of many visitors. But they’ve made LACGC a better, more efficient place. And they’ve come directly as the result of increased play the last 20 months. The players of Los Alamos County Golf Course will rightfully reap the benefits of the money they invested at this government-owned recreation facility. When the course opens back up in 2022, the cycle continues.