Welcome to our all-new “A Round At…” series, where a resident GOLF staffer runs through a recent day at a course you might see in your future. On this occasion, we’ve got Somerset Hills in New Jersey…

You’ve probably heard of Winged Foot, Baltusrol and Bethpage Black. Possibly you’ve played them. Almost certainly, you’ve seen them on TV. But unless you’ve got an active inner-architecture nerd, odds are you haven’t given a ton of thought to a certain other A.W. Tillinghast layout.

Though it’s not quite right to call Somerset Hills a sleeper — it ranks an underrated 75th on GOLF Magazine’s list of Top 100 Courses — the club has never clamored for attention. It’s a hush-hush sort of place. Playing it brings the illicit thrill of getting on an impeccably kept course that’s hard to access. But more than that, it’s a wildly entertaining and artful introduction to Tillinghast at his bedeviling best. Like I said: active inner-architecture nerd.

My tee time: Tuesday morning, June 11. Ahem. They do not do tee times.

How I got on: Through a friend of a friend.

Difficulty: It doesn’t bludgeon you with length, but it stands up to you with its subtlety. The greens are as craftily contoured as any you can imagine, and when the course is playing firm and fast, as it usually is, it calls on everything you got. Plenty challenging but plenty fair is how I’d characterize it.

How to get there: Like most things in New Jersey, it’s not far off the turnpike. But I took the train from Penn Station. About 1 hour and 45 minutes each way, and more than worth the trip. 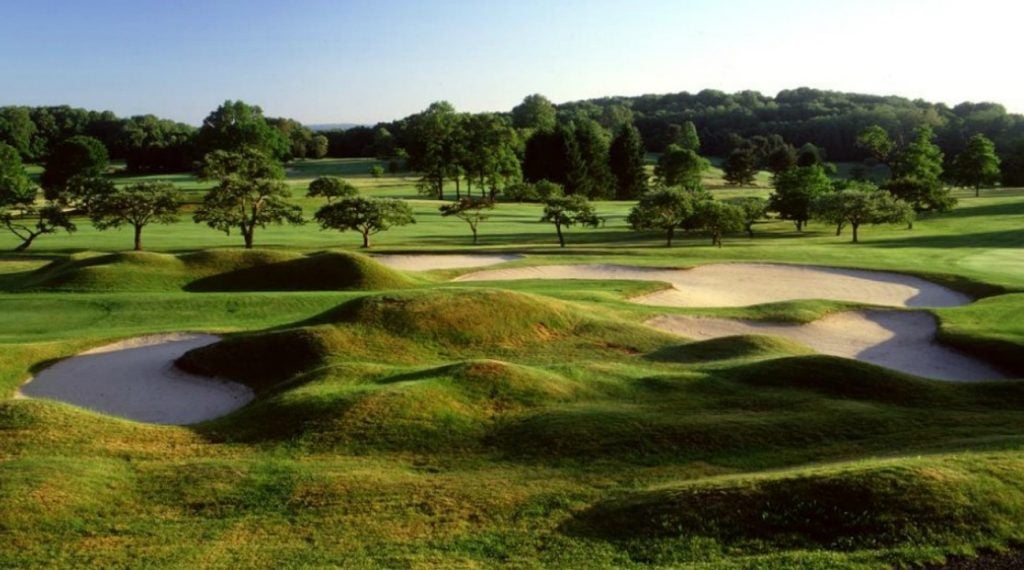 Fun Facts: Tillinghast finished it in 1918. He was working in the footprint of an old racetrack, so there’s an intimacy to the layout, but it never feels cramped. It tips out at 6,803, par 71. The front and back nine provide a stark contrast. The front has an open heathland look, with rollicking shifts in elevation and wispy, browned out grasses along the fairways for a kind of sepia-toned look. The back nine is forested. Very different, but every bit as entertaining.

Notable and Favorite Holes: If you want to get a golf design geek really going, start talking about the par-3 2nd, which isn’t the world’s first Redan hole but might be the world’s greatest Redan hole, with a deceptive carry over a valley and a beguiling green tilting right to left. My tee shot got thwarted by a false front. Delicate chip. Deft three-putt. I don’t think I’ve ever made a double-bogey that was more fun.

I loved: The greens and the routing were especially cool. You play a course like this and think — wow, golf design used to get it so right. Bummer that it wound up going so wrong for so long.

I didn’t love: The 18th hole — an uphill par-4 without a lot of intrigue — is an underwhelming close to an otherwise overwhelmingly great course.

If golf could be like this every day, I would, well, play golf every day. Company was great. Pace was brisk. Course was impeccable. But it did leave me with the wistfulness that often comes with rarefied experiences. Sniff. Sad truth is, golf isn’t at all like that for me every day.