Shank is a word that most golfers fear even to utter out loud, but at Aldo’s Farm & Table at Sand Valley, Wisconsin’s acclaimed golf destination, culinary director Jon Keeley relished the idea of making a pork shank the centerpiece of his menu.

“We played with the idea of not putting the word shank on the menu,” Keeley says. “But after much discussion, we went with it. And it became a cool talking point at the table.”

Keeley has an extensive background in fine dining, and has been working to marry his wow-factor, Chicago-honed skills with the more rustic palates he now caters to in the Badger State.

“What we’ve tried to do is take these ingredients everybody knows and loves, and the techniques I’ve been using over the years, and translate them into nostalgic home cooking for our guests,” he says. 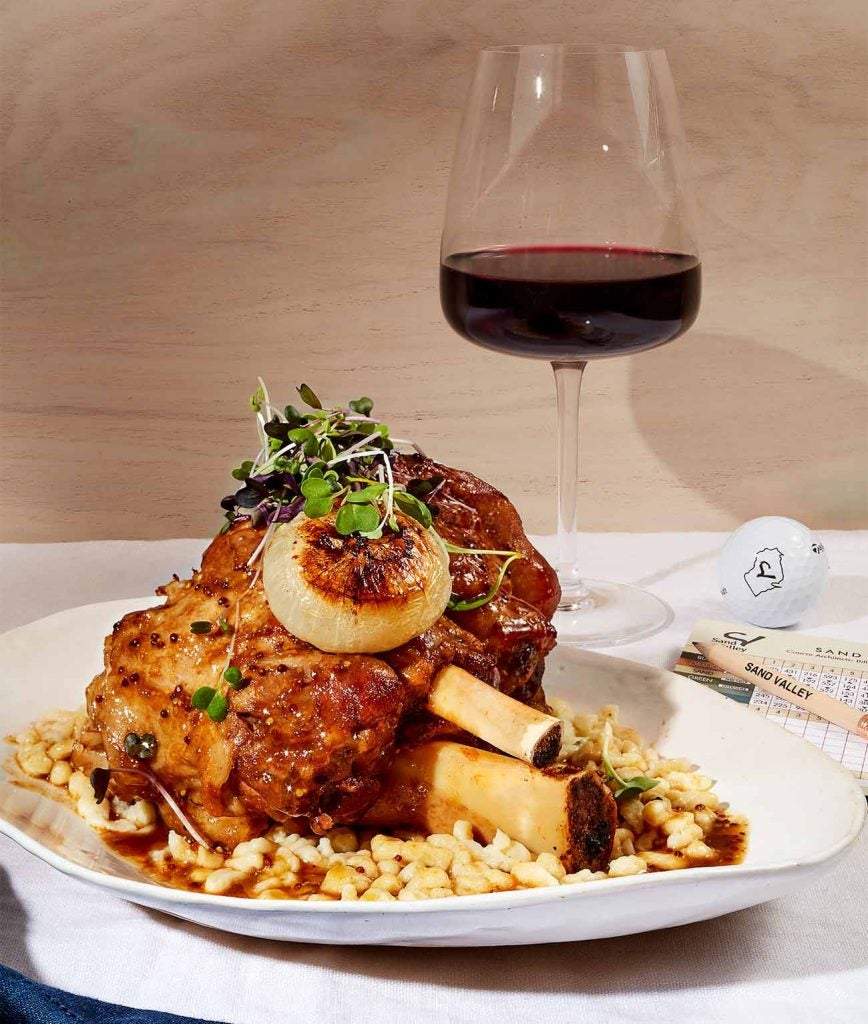 To wit, Keeley’s pork shank is brined for 24 hours, dried for another 12, and then slowly braised in a pork jus after roasting. “It’s literally fall-off-the-bone tender,” he says.

Impressively, Sand Valley serves 25 to 30 shanks per night since the dish’s debut on the menu. “It became one of the top sellers,” Keeley says. “Bandon Dunes has meat loaf that everybody raves about. I want our pork shank to become just as memorable.”

1. Cover pork shanks with brine and refrigerate for 24 hours.
2. Drain brine and let air-dry for 12 hours.
3. Season pork shanks with salt and pepper.
4. Sear pork shanks in large rondo or tilt skillet until caramelized. Transfer to large pan.
5. In same skillet, caramelize mirepoix. Then deglaze with whiskey.
6. Add the mirepoix, spices and hot pork stock to the large pan. Be sure shanks are completely submerged in liquid.
7. Cover with parchment paper and foil crimped tight.
8. Cook at 300 degrees for 3 hours and 45 minutes or until pork is tender.
9. Allow shanks to cool completely in the liquid.
10. Remove shanks and put in oven. Warm to 160 degrees.
11. Strain jus, reduce in skillet and finish with butter for sauce. Pour over shanks and garnish with thyme.