Perhaps it was ill-advised to send me — all of 21 years and 159 days — out on this venture. My beer palate (to the extent it can be characterized as such) is generally guided by one overriding criteria: whichever is cheapest.

Nevertheless, I [Editor’s note: luckiest intern on the planet!] was the one walking through the double doors, past the brick exterior and into a seat along the bar at Pinehurst Brewing Company this week. After a moment of bewilderment — Why would a golf publication want to write about his beers? — the bartender began giving me the rundown. He handed me a menu with the day’s offerings on draft. The beers, he noted, rotate so quickly that it can be hard to keep track.

The aura offers a vibrant meld of those fresh off the golf course, families enjoying a meal and locals gathering at their spot. The Brewery occupies the same building that provided power to the entire resort as the steam plant since the resort’s inception in 1895 — originally known as “The Power House.” The historic building narrowly skirted demolition in the 1990s, and the brewery — opened in 2018 — kept it largely intact. The rustic aesthetic is a clear nod to the symbolic importance that building still holds. It’s been a smashing success from the day it opened.

The beer is brewed in plain sight, visible to the entire restaurant through a massive glass window. I arrived Tuesday eager to see what all the buzz was about. The bartender brought out a pilot of the first four beers he recommended, along with an order of (top-notch) wings, and we were off. More tastes followed. Without further ado, the unequivocal, indisputable, absolutely definitive ranking of the five beers to try today at the Pinehurst Brewing Company.

5. Kveiking
To start with, Kveiking (pronounced “viking”) gets props for the name. It’s brewed with the Norwegian yeast strain “Kveik,” hence the double-meaning. It’s similar to the Nectar Remedy (yet to come), but with less subtlety. Personally, the blend of tropical fruit and melon was a bit overpowering, though, and as a result the Kveiking comes first on the list, just inside the top 5. And if you’re not down with a fruity beer, keep looking. 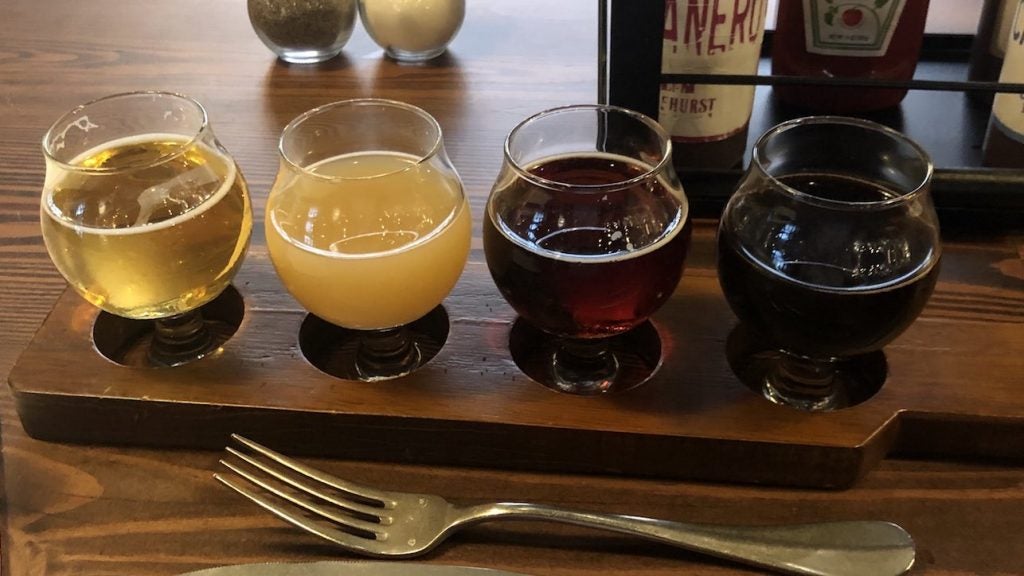 4. A.M. Snack (Oatmeal Stout)
A wise person once said, “Coffee keeps me busy until it’s time to drink beer.” It’s an aspirational lifestyle, especially as I enter my senior year of college. The A.M. Snack, though, seeks to merge the two by capturing the bitterness of black coffee in a stout. This nod to the breakfast crowd is bold and brash, and as a consumer of all-things coffee, I tip my cap. Still, if black coffee or dark beer isn’t your cup of joe, this might be one to miss, especially given the host of options available. If it starts becoming socially acceptable to drink this in the morning, though, game on.

3. Cerveza de Lago
It’s the lightest of the beers on the sorted lineup in front of me. It’s also far and away the most crisp. Picture a Corona, but better. Like — way, way better in every category. From the first sip to the last, it’s a beer that goes down easily. It may not quite nudge the top spot on this list, but I guarantee you won’t be disappointed.

2. Killer Sky
The menu describes it with the following: “Sticky bitterness from simcoe hops and a nice, malty backbone with a semi-dry finish.” Now, while I’m not sure what those words mean in conjunction with one another, I do know my tastebuds don’t lie. If citrus-y beer doesn’t entice, as is the case with many avid beer consumers, there’s a case to be made for Killer Sky atop the list. It is absolutely worth a try. Or if you’re more beer literate than I, decipher those descriptors for yourself to decide whether this genre appeals to you.

1. Nectar Remedy
It looks, smells and tastes like your morning juice. I suppose there’s some downside to this — for one, if you don’t like citrus, you might want to look elsewhere. But it’s both immensely refreshing and still not overpowering, with the highest ABV (7.0 percent) on the menu to boot. To cap it off, there’s just a bit of kick at the end to remind you it’s an IPA. It’s easy to imagine coming off the golf course after a hot summer day with a hankering for one of these. Or three.

How to get tickets for the 2023 U.S. Open at Los Angeles Country Club