What’s next for GOLF’s Top 100 Courses in the World? There’s a lot to look forward to 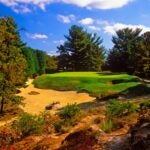 How long will Pine Valley stay atop our list?

Ed. note: With each new Top 100 Courses ranking comes new learnings, both large and small. Our 2021-22 Top 100 World list is no exception. To better understand this ranking’s key trends and takeaways, we asked Ran Morrissett, who manages our ratings panel, for his observations. Here’s the final installment of his seven-part series.

More of the same — at least, let’s hope so! Superb restorations and the annual opening of multiple world-class originals will remain the order of the day. Also, it seems like Pine Valley will forever retain the No. 1 spot. As the Olympic middle-distance runner Noureddine Morceli famously quipped, “When I race, my mind is full of doubts. Who will finish second? Who will finish third?” This year, in fact, Pine Valley slightly widened its lead over second place.

On the restoration front, akin to his efforts at Inverness, Oak Hill and Congressional, Andrew Green is now bustling away at the venerable Scioto in Columbus, Ohio, infusing Donald Ross qualities back into the landscape while unwinding work done in the 1960s. Stay tuned for that reopening in 2022.

Elsewhere, Clayton, DeVries & Pont are busy working on The Addington in Croydon, just outside of London. The property is so rambunctious, so adventurous, that it has enjoyed Top 100 in the World support pre-restoration. Additionally, CD&P have also started the build at 7 Mile Beach outside Hobart in Tasmania. Built on sand dunes, the course’s construction process will be quick, embracing the land’s unique topography and aesthetic.

Coore & Crenshaw have three projects coming on line late next year, thousands of miles apart from one another. Te Arai Links is five miles down the coast from Tara Iti on the North Island of New Zealand. The second is on St. Lucia in the Caribbean courtesy of the folks who brought us Cabot Cliffs (No. 44). With nine greens cliffside and the interior holes shaping up to offer golf just as good, a new standard — accompanied by a bunch of magazine covers — is likely to be set for the Caribbean. Finally, there’s Brambles, north of San Francisco. Its zoysia fairways will promote “bouncy” golf and minimalist design. It’s already being hailed as a welcomed throwback.

Mike Keiser has long been fascinated by the concept of building The Lido, considered the greatest course in the world when it opened just beyond the runways of the current JFK airport in 1917. Keiser’s dream becomes a reality when Tom Doak’s effort debuts across from Sand Valley Resort in northern Wisconsin. The classic template holes from C.B. Macdonald that made Lido a legend will continue the torrid stretch of great course openings in the Badger State this century. Other recent examples of template holes being embraced include the South Course at Arcadia Bluffs, Lonsdale Links on the Bellarine Peninsula in Victoria, Australia, and the just-opened Ballyshear (the name of Macdonald’s house on Long Island) Golf Links in Thailand. What’s old is new again.

Let’s get ready to… grumble!

As you peruse this ranking, you’re likely to get upset. Me, too! Where’s Banff or Notts? I kick gravel around my driveway in frustration at the exclusion of pet favorites. But hey, it’s fussing about those that don’t make rankings so much fun. It stimulates conversation on architecture, and that’s where we all win. Let the fussing begin! But be honest: When thinking of the courses on this list (and those that could be), to say nothing of what’s on tap, golfers — and course fans — have never had it so good.