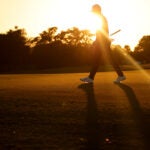 Entering last year’s Houston Open, there were plenty of questions about the venue. The tournament had endured a lot of change in recent years; its spot in the Tour schedule shifted, its longtime sponsor (Shell) left and a new sponsor (the Astros Foundation) arrived. And now they were headed to a brand-new golf course, Memorial Park, a muni in downtown Houston that had just undergone a significant overhaul under the watchful eye of Tom Doak.

Memorial was a fitting host. The tournament was actually played at the course early on, first in 1947 and then from 1951-1963, which meant the return was both a nod to the event’s history and a celebration of a new, good thing — the Astros Foundation committed $34 million to the course project and ensured the tournament would stay in town.

But Tour pros don’t often love change, so it’s hard to know how they’ll respond to a new course inserted in the familiar rotation, particularly when that course is a heavily trafficked municipal.

“New golf courses take some time to settle in,” said Jason Dufner earlier this week, at the newly-minted Hewlett Packard Enterprise Houston Open. He played in last year’s event, too, and was complimentary of the year-over-year maturation he saw.

“Obviously it’s a public golf course, so it gets a lot of play, but they’re new to it here at Memorial Park, hosting an event, and they’ll figure it out.”

Dufner echoed the general sentiments of players in attendance this year. They seemed pleasantly surprised by the course’s conditioning. They enjoyed the energy of playing in a public park in downtown Houston. They seemed perplexed by a challenging, taxing course. And they enjoyed the mental challenge of the strategic variety coming down the stretch.

“The Tour does a great job helping them along with the agronomy and all those things,” Dufner said. He’s right — one of the benefits of being in the Tour’s rotation is that you get support from top-level turf stars throughout the year. That makes a big difference, and it’s one of the things that will convince Dufner to keep coming back. “I look forward to being a part of the event year in and year out,” he said.

Jason Kokrak, who wound up winning, said he was particularly impressed with how the redesign made the course so interesting.

“The greens were pretty incredible. I mean, not as firm as last year, but rolling very true,” he said. “I think it’s a great golf course. The topography is great considering how flat this area is.”

It wasn’t all perfect. This is November in Houston, where the weather can be unpredictable. A recent frost in Houston caused some challenges, and early-week rain prompted the Tour to play preferred lies. Missed fairways meant the risk of mudballs and there were some imperfect lies in runoff areas where grass was bare. But the general sentiment was overwhelmingly positive.

Talor Gooch, who grew up one state north in Oklahoma, spoke to the vibe.

“It’s one of my favorite places,” he said. “I grew up on a city golf course back where I’m from. I wasn’t a country club kid, so it’s nice kind of feeling like I’m getting back to my roots. Obviously this one’s a little bit nicer than what I grew up on, a little bit more challenging, but it’s just nice rolling up and feeling like this is kind of similar to what I grew up playing.”

Jhonny Vegas has lived in the Houston area for some two decades and said the energy at Memorial Park is much improved.

“The crowds have been amazing,” he said. “The Astros Foundation has done a phenomenal job on kind of creating a great atmosphere. Out here you almost feel like you’re almost at an Astros’ game, a little bit of that type of feel. We need that. We have to find a way to make this tournament something really nice, really cool here in town and we have a really good start.”

Roger Sloan also lives locally. He praised the course’s location for the ways in which it can showcase the city.

“We have more of the cultural scene down here in this area, so it highlights Houston for the players, the caddies, and I think you’re going to get a lot more hype and fan interaction throughout the week with the location here,” he said.

Where things got complex was in describing the course itself and how to attack it. A first look suggests a bomber’s paradise, but a closer look showed a course that demands precision, care and patience.

“There’s some pins out here that are pretty nasty if you do miss, so I’ve been playing away from the pin on occasion, which I don’t normally do,” Kokrak said.

“It’s really a course of misses,” said Kramer Hickok, who finished in fourth. “It’s not a course of how well you’re hitting it. You could hit it great and have a couple misses in the wrong spots and make easy doubles.”

“Well, it’s long, number one, and they can make it way longer if they needed to, and around the greens is very difficult,” Joel Dahmen said. “With the way the greens are, you have to be so precise on the greens and it’s tough to be precise from 200 yards.” He finished T5.

Any course where the winning score is just 10 under par reveals its difficulty, but players insisted the test is plenty fair.

“It’s a place where you can score, it’s just really difficult to,” said Scottie Scheffler, who held the 54-hole lead before finishing T2. “It’s a challenging golf course. I really appreciate that. I feel I get a little tired of playing the golf courses where you’ve got to shoot 20-something under to win.”

And then there’s the finishing stretch. A good tournament golf course is memorable, it’s challenging and it showcases variety. Memorial Park’s back nine has that in spades. No. 13 is a drivable par-4 with some severe greenside areas that demand a well-oiled short game.

No. 14 is a brutal par-4 and arguably the toughest hole on the course. No. 15 is a short par-3 that played just 115 yards on Sunday and is surrounded by fans; it’s Houston’s version of the party par-3 popularized by the Waste Management and adopted by the Honda Classic, among others.

“A lot of things can happen on 15. You can see guys make a double or a triple,” Dufner said.

No. 16 is a risk-reward par-5 that demands a bold tee shot to get home in two. It’s also one of the only driver holes where a hazard is in play. No. 17 is a short, awkward par-4 with a terrifying green and water lurking on every approach shot — and even plenty of chips. Matthew Wolff was chasing the correct angle in the third round and selected a particularly strange club off the tee: Pitching wedge. He then hit his approach shot into the water.

“Not many times I thought I would be making double with two wedges, but it is what it is and I have to live with whatever happened,” he said.

And No. 18 is the last of several of Memorial Park’s long, demanding par-4s. If you make birdie to win, you’ve earned it.

“I think what they’ve done with those last four holes trying to bring as many fans as they can into that area of the golf course I think will be really nice on the weekend,” Dufner concluded. He was right.

Pros aren’t always thoughtful or effusive about the courses they play. Their job is to record the lowest score possible, which doesn’t always have much to do with how much they like a course’s architecture or its playing style. But they seem to like this one, especially considering it’s the Tour site with by far the cheapest greens fee: Those max out at $38 on a weekend, while juniors ($10 on a weekday) and seniors ($15 on a weekday) get an even better bargain.

“I think what this whole golf course does is rewards good shots and punishes bad shots,” said Marc Leishman.

What more can you ask for than that?