Whistling Straits beat you up? The par-3 Baths course is the perfect spot to lick your wounds

The Baths is the Kohler golf experience, in miniature.

Remember the good old days of the buddies’ golf trip, when you’d rise with this sun, play 36 holes from dawn to dusk, gorge yourself on good food and drink, sleep like the dead, and then get up the next morning and do it all again? Fun times, for sure.

But also so 20th-century.

You do all of the above, but it doesn’t end there. You’ve got to add a loop (or two) on a fun-packed par-3 course.

This point was underscored a few months back, when two colleagues and I traveled to Destination Kohler, in Wisconsin, for a Ryder Cup preview that doubled as a golf smorgasbord. On our jam-packed itinerary, we feasted on Kohler’s four 18-holers (Irish, River, Meadow Valleys and this week’s Ryder Cup host site, Whistling Straits). If our scores were high, so were our spirits. Our bodies, meanwhile, were another matter. Barking feet. Aching backs. We wanted to keep playing but not grinding. We could have used the spa.

Instead, we hit the Baths.

Completed this past summer, the Baths of Blackwolf Run is a 10-hole, par-3 track that sits between the first and 11th holes of the Meadows Valleys course, offering golfers a bite-size complement to Kohler’s beefier options. Its holes, which range in length from 60 to 160 yards, can be played in order, but the routing allows for modified loops. Accessible and flexible. That’s the idea.

While the Baths is part of an industry trend (par-3 courses are all the rage these days at top resorts around the country), it has an identity of its own. Designed by Chris Lutzke, a former right-hand man to Pete Dye, it shares the aesthetic of the resort’s other Dye-built courses, particularly the Irish and the Straits. The turf is bouncy. The greens are wild and ornamented by sod-walled bunkers. The holes have cross-the-pond inspired names (Redan, Postage Stamp, Alps and so on) and their features fit the part.

The two-acre putting course is a sweet site for absurdist cross-country putting contests. 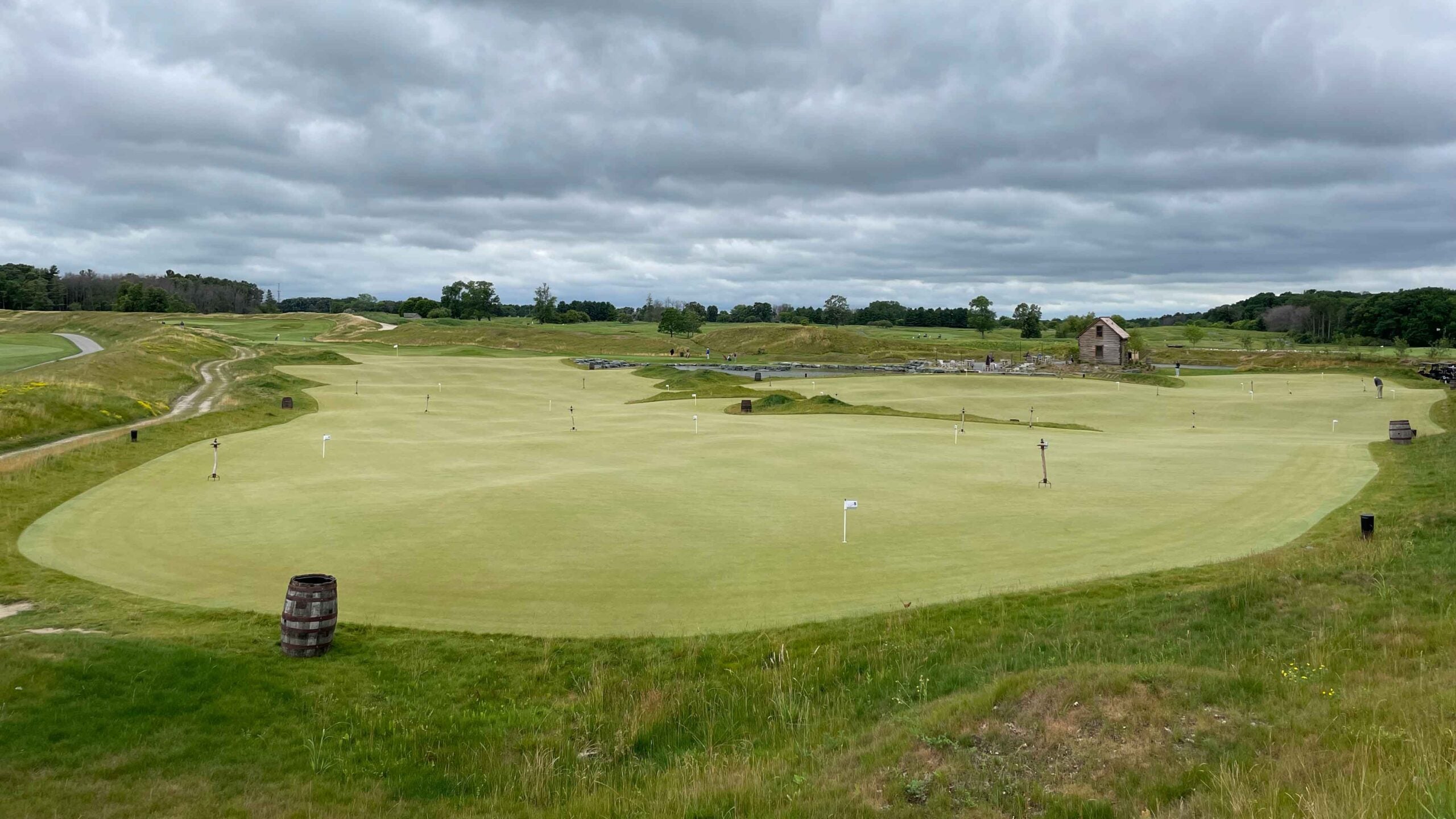 Unlike the Straits, the Baths doesn’t sit on a Great Lake. But it winds around a constellation of water features. Though none of the holes requires a forced carry, you can get wet with an errant shot. Or with a cannonball. When they say “Baths,” they mean it. The water hazards here are also swimming holes.

With that in mind, the dress code on this short course is loose. You can play in flip-flops and bathing trunks. On the afternoon we showed up, the sky was gray, and the air was cool, so we stuck to standard golf attire. But we left behind our bags, grabbing just a few clubs and stashing them in the slender carry bags that are there for you to borrow at no extra charge.

The Baths’ “pro shop” is a cozy log cabin-like structure that also functions as a food and beverage station. If ever a round deserved a few libations, it’s on an easygoing loop like this. There’s also a two-acre putting course, a sweet site for absurdist cross-country putting contests. Or simply as a place for settling unresolved bets.

I can’t recall which of my playing partners collected all the money. What I know is that I lost, but that our Baths outing felt like a win.

The Baths is open to the public during Ryder Cup week. The fee for resort guests and the public is $75, which covers the cost of all-day play. Children 17 and under play for free when accompanied by an adult.