Your 30-second guide to the Evian Championship: Who’s winning, who missed the cut, best shot and more

It’s a log-jammed leaderboard at the year’s final major. Four players share the lead at the Evian Championship’s halfway mark, while several big names are in contention and several others won’t be around for the weekend. Here it is: your 30-second guide to Friday at the Evian!

Who’s winning? A whole bunch of people! Americans Amy Olson and Mo Martin share the lead with South Korea’s Mi Hyang Lee and Puerto Rico’s Maria Torres; they are tied at eight under. Olson had the best round of the group, posting a six-under 65.

Who’s chasing? First-round leader Carlota Ciganda is one shot back at seven under, while Angela Stanford shot a second-round 64 to lead a large group at six under that also includes Canadian sensation Brooke Henderson.

Who missed the cut? Just two of the top 25 in the Race to the CME Globe standings missed the cut in France. World No. 1 Sung Hyun Park struggled to an opening-round 77 and tacked on a second-round 71 to finish T90. Lexi Thompson hovered around the cut line before bogeying her final two holes in excruciating fashion to miss the cut by one. 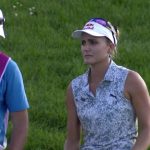 You may also like WATCH: Tearful Lexi Thompson misses cut in most excruciating way possible

Shot of the day:

WHAT. A. HOLE⛳️👌🏻 Defending champion @a_nordqvist teeing off on the stunning par-3 2nd hole @evianchamp

This isn’t so much for the golf shot as it is for the camera shot. That is a heck of a scenic par-3.

Quote of the day: Torres, 23, downplayed any anxiety she was feeling after the first round. But on Friday she opened up when asked if leading in just her second major made her nervous. “I have to say a little bit,” she told LPGA.com. “It’s something new and it’s exciting. After that, just go out there and just play golf. That’s the only thing I can do.”

How can I watch?

TV coverage of the Evian is available over the weekend: