Lexi Thompson came to the 18th hole at the Evian Championship needing par to advance to the weekend at the year’s final major. She found herself in a precarious situation when her approach shot rolled up against the collar at the edge of the rough. And then came a particularly un-Lexi-like chip.

Thompson, the world No. 5, was set up for a steep angle of attack but appeared to decelerate through impact. The thick rough grabbed her wedge and the ball came skittering out sideways, advancing less than five feet. Thompson, understandably frustrated, swung her club through the air. As she regrouped with her caddie she was clearly emotional, blinking away tears as she lined up her next chip. Thompson gave it a good effort but it ran just past the cup, and she cleaned that putt up for a final-hole bogey.

Oh no ? — Lexi needed to get this up and down at 18 to make the cut. Obviously a tricky chip, but what a brutal way to end the year’s last major. pic.twitter.com/dImJH8DcKO

Thompson’s second-round 75 left her at four over for the tournament, just one shot outside the cut line.

It has been an up-and-down year for the American star. Thompson has been in contention at a handful of tournaments throughout the 2018 season and has notched six top-10s in 16 starts, including a T9 in her most recent event. But she withdrew from the British Open and stepped away from the game for several weeks over the summer, citing mental fatigue. 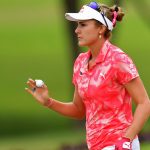 You may also like Lexi Thompson returns to competition: ‘I’m not just a robot out here. I need to have a life’

“The events of the past year and a half (on and off the golf course) have taken a tremendous toll on me both mentally and emotionally,” she said at the time. “I have not truly felt like myself for quite some time. I am therefore taking this time to recharge my mental batteries, and to focus on myself away from the game of professional golf.”