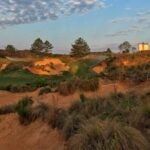 At some point, there became a notion in the U.S. that the game of golf needed to be fair. All of our sports are fair — each baseball team gets three outs, both rims on a basketball court are 10 feet high and each football team gets 11 men on the field. So, when a golfer walks up to the tee and can’t see their target, it’s natural for them to think it’s unfair. But they’re wrong.

Golf isn’t like those other sports. It isn’t always fair and that’s part of its everlasting charm. It’s you versus the Earth in a battle in which you are very much overmatched.

Blind shots are one of the more controversial topics when you ask golfers about course design. Some despise them, and it’s easy to understand why. What kind of ridiculous sport makes you try to hit a tiny ball toward a green or fairway you can’t even see? There seems to be some level of diminishing skill there. We’re all just guessing at some point, right? And there are some obvious downsides as well. Blind shots can slow down play on busy courses when you can’t see when the next shot is clear. They can also lead to lost balls when cruelly designed to trick the golfer. And none of us like paying for new golf balls — especially when we don’t feel like we deserved to lose the last one.

But the fun that comes along with blind shots far outweighs the few negatives (that often don’t even apply). The best golf courses challenge us and demand us to answer a variety of different questions. A blind shot is simply a new question: Can you focus on an imaginary target and accept where your ball ends up?

I look forward to blind shots. One of the most exciting moments in golf is turning the corner or climbing the hill to a blind green, peeking over as early as possible, trying to glimpse where your shot ended up. What pure joy! What other sport allows you to be surprised by your own play like that? What a roller coaster of emotions for your ball to disappear, only to be found exactly where you were hoping for.

Of course, as the saying goes, it’s only blind the first time you play it. That first play-through is a moment of exploration, your own chance to find what terrain and challenges lie ahead. A time to learn and remember for the next time. After that, it becomes a challenge of memory. Do you remember what the best line is and where the best place to miss would be? There becomes an advantage to repeated play.

Golf architecture is all about variety, so too many blind shots might not be ideal, but a couple won’t hurt anyone. It’s all about balance. Some golfers, myself included, even seem to hit better shots on these holes. Without a target to keep looking at, my mind is freed up. I can focus on a smooth, simple swing, where I don’t have to worry about being so precise. Is there a better feeling than hitting a shot flush, seeing it disappear, then looking over at a friend, shrugging and saying, “We’ll see, I guess.”

There are hundreds of examples of fantastic, beautiful, exciting golf holes with blind holes. I’ve picked out three — a par-3, par-4 and par-5 — to discuss.

Starting with the par-3 5th hole at Lahinch in Ireland, known as the Dell hole, is an obvious place to begin.

“One of the factors I kept asking myself when considering all of the great blind holes out there was ‘How would the hole look and play if the blindness were simply removed?'” architect Rick Phelps told Adam Lawrence in a piece on Golf Course Architecture. “The Dell would be a very bland, medium-to-short par-3, and nothing more.”

The blind tee shot at the Dell hole has made it one of the most famous shots in the world. Most of the green is hidden behind a large dune, though the greenskeepers move a stone on the hillside each day to indicate where the pin is. Other than that, you have to make a good swing, and wait until you arrive at the green to discover your fate. The green is not very deep, so distance control is important if you want to wind up pleasantly surprised when you reach the green.

For a par-4, let’s look at the 9th hole at Royal County Down’s Championship Course in Northern Ireland. Rather than a blind green, this hole features a blind tee shot. From the tee, the landing area in the second part of the fairway is not visible, making golfers choose a spot in the distance to aim at and hope. With two bunkers short and left, but a massive dune to the right of the green, this hole isn’t easy even if you find the correct part of the fairway.

For our last example, we’re going stateside, to Tobacco Road Golf Club in North Carolina (photo above). While this course is full of blind shots, we’re focusing on the infamous par-5 13th hole. Designed by the late Mike Strantz, you already have to have a sense of humor to take on Tobacco Road. Even on the yardage book, a quote from Strantz reads: “I don’t care if people think my courses are too hard.” This par-5 is a three-shot hole for most and plays up to a green that is almost completely hidden. The green is like a bathtub, surrounded by high walls except for a very small opening on the right front. By this point in the round, you’re used to not having a clear view of the flagstick or the putting surface, making the shot a bit less intimidating, though no less fun.

Plan your golf trip with our Pro Shop What's a bury pit? Why there might be a lot buried beneath the surface at your golf course

Here's why this week's WGC course is named 'The Concession'