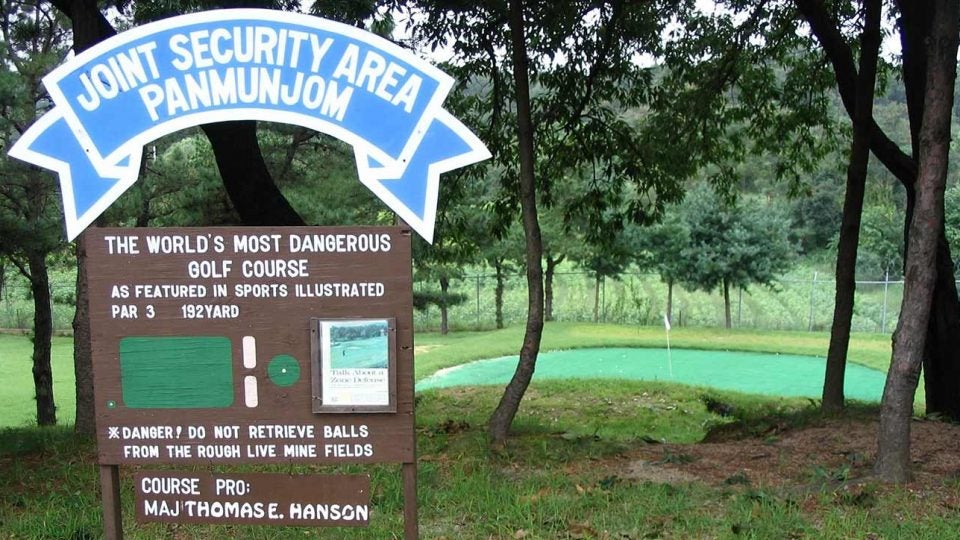 Camp Bonifas has a 192-yard golf hole, but this is far from your typical par-3.

Nestled amid a triangle of live mines, an 18-foot-high security fence topped with concertina wire, a six-foot deep trench, an empty machine-gun nest, a ginseng field, an army bunker, tigers, a vampire deer and something called a man-bear-pig lies a 192-yard par-3.

And, oh yeah, less than 500 yards to the south is the Demilitarized Zone, the buffer that separates North and South Korea.

This is golf in a war zone. Welcome to Camp Bonifas.

The base was named after Captain Arthur Bonifas, an American who was slain by the North Korean Army in 1976 with pick handles, knives, clubs and axes. The Axe Murder Incident, as it’s referred to, started as a dispute over tree pruning. The Americans trimmed a poplar tree that the Koreans claimed was planted by Kim Il Sung, North Korea’s founder.

Twenty North Korean army members crossed what’s known as the “Bridge of No Return,” which straddles the military demarcation line between the two nations and was used for prisoner exchanges during the Korean War. Once they crossed, the North Koreans used some of the axes left by Bonifas, and attacked him and fellow American Mark Barrett. Both were bludgeoned to death. The Americans responded with Operation Paul Bunyan, a sort of green-thumbed show of force — they cut the rest of the tree down, minus the stump, and the Koreans stood down. 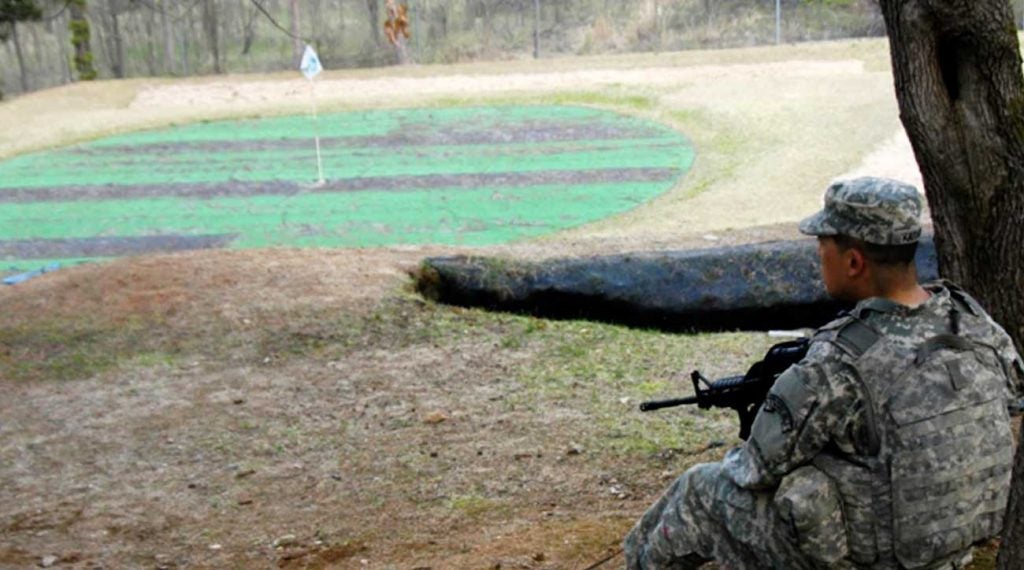 Even if you hit the green, it's no easy task making it sit on AstroTurf.

But the golf course — or, more accurately, the golf hole — remains a necessary diversion for American and South Korean soldiers stationed there. Because it is these soldiers, located less than a mile-and-a-half from the North Korean border, who would potentially be among the very first casualties should war break out.

Despite the surroundings, the course is functional. The tee box sits 50 feet above the fairway, according to ESPN, which itself is on top of an empty machine-gun nest. The course is all artificial turf. Though short in distance, it’s a seriously tough hole (and we’re not just saying that because of, you know, the whole war thing). Strong wind gusts from the North Korean side makes no shot easy. There’s a reason Sports Illustrated called it “the most dangerous hole in golf.”

The hole was built to serve as a distraction, if such a thing can even exist here. This is a place where soldiers sleep with boots on and laces tied, where a colonel once said that, according to the New York Times, “our ability to survive a strike on Camp Bonifas is minimal.” This is a base with no families allowed. It’s nothing like nearby Camp Casey in South Korea, which boasts a nine-hole golf course, fast food restaurants and a movie theatre. 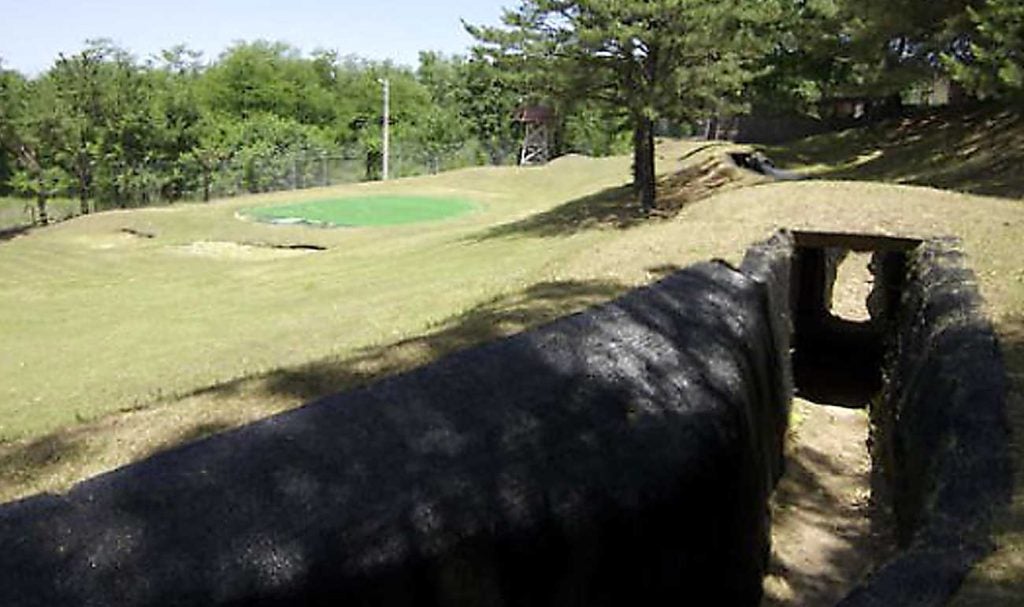 A view of the tunnel that goes down the right side of the hole.

But it’s not all barren. There’s actually a surprising number of tourists who stream through, nearly 1,000 a day, so much of the troops’ duty is giving tours, according to the Washington Post. (They must memorize a 13-page history of the Korean War before they can start.) There’s also a gift shop with DMZ-related paraphernalia.

They get more famous visitors, too. Andrew Luck and Randy Johnson have stopped by. Even Paula Creamer popped in to play a round. “It’s so humbling because the way I look at them, I feel like I have the most respect,” Creamer told the LPGA website. “I don’t know how they do it being so far away from their families and keeping your country safe and fighting for us. Their faces light up when you talk about sport in general but being a female golfer coming in there and being able to hit chip shots or balls on the range and play the toughest par-3 in the world, that’s pretty cool.”

But for all the visitors and tours, the gifts and Korean War history recitations, the hole remains a place where North Korean soldiers are across the way, ready at a moment’s notice to fire, where you must play a “round” of golf with a round of bullets accessible, where the drum of war replaces the game’s typical tranquility.

This is golf — a diversion from life’s stresses. But it’s also a war zone. There’s no other 192 yards quite like it.