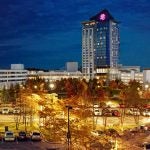 Turning Stone is a genuine escape, be it from the madness of Manhattan or the quiet of the small towns around it. There’s a buzz at this central New York retreat that begins on the first tee and extends through the casino floor all the way into the nightclubs. Get up early to squeeze in 18 holes at Tom Fazio’s Atunyote course and another 18 at Robert Trent Jones Jr.'s Kaluhyat (replay rates come at an attractive price). But be sure you save some energy — a big night awaits. Take your pick from more than a dozen dining options, including the TS Steakhouse atop the resort’s Tower, a Wine Spectator Award of Excellence winner featuring spectacular panoramic views. From there it’s up to you, whether you want a signature craft cocktail from the Turquoise Tiger, a rock & roll vibe at The Gig or a full-on evening out with table service at Lava Nightclub. At Turning Stone, you get championship golf and so much more.