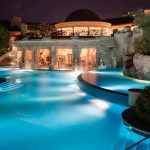 A welcoming Caribbean luxury outpost since the 1930s, Sandy Lane Resort was purchased in 1998 by wealthy Irish businessmen J.P. McManus, Dermot Desmond and John Magnier. They promptly demolished the resort and initiated a three-year, $450 million upgrade and renovation. Tom Fazio was tapped to design both the Country Club course, site of a 2006 World Cup event won by Germany, and the famed Green Monkey course, carved from a limestone quarry. A third layout — the nine-hole Old Course — oozes old-school charm. The resort has welcomed the likes of Queen Elizabeth II, Elton John, Jackie Kennedy and T.S. Elliot. It boasts one of the largest spas in the region, consistently ranked as one of the top in the Caribbean with a deep menu of treatments. Weddings are a specialty and while you don’t have to rent out the entire resort like Tiger Woods did years ago, you can still celebrate your nuptials (or an anniversary) in grand style.