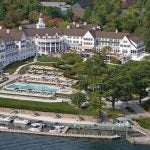 In the years following the Civil War, Manhattanites fled the city for the cooler climes of the Adirondacks, made possible by the advent of the railroad. Donald Ross hopped one of those trains in the mid 1920s and made his way to The Sagamore, one of nearly 200 luxury hotels that opened in the region around the turn of the century. The famed designer laid out a sporty par-70 with an opening hole plunging downhill and offering jaw-dropping views of Lake George and the mountains beyond. The balance of the course winds through beautiful, tree-lined hills and past several ponds that test golfers’ nerves on holes 5, 6 and 13. The true Sagamore wow-factor, however, stems not from the course, but the stately hotel situated on its own private island. Golfers gravitate to Mr. Brown’s Pub, a cozy bar steeped in Adirondack camp décor that morphs into a lively evening hangout after hours. In addition to the historic main hotel, The Sagamore offers spacious two-bedroom, two-bathroom condos that setup perfectly for golf buddy trips.