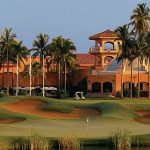 Golf course architect Robert von Hagge once appeared in commercials as the Marlboro Man, so it stands to reason that the Dick Wilson protégé gravitated toward the wild golf frontiers of Mexico. His 27-hole compilation at Grand Isla Navidad Resort near Manzanillo is widely regarded as his piece de resistance south of the border. The three nines are named for their defining characteristics: Ocean, Mountain and Lagoon. The country club, the centerpiece of the resort, borders the Pacific Ocean as well as the Navidad Lagoon. Accommodations consist of 158 guestrooms replete with traditional marble flooring, and 41 luxury suites including three that share a private pool and garden. Tequilas Bar, with more than 200 varieties of the spirit, also mixes up chocolate, coconut and lemon margaritas. In the high season, four restaurants serve-up Mexican and Pacific Rim specialties. The closest airport is in Manzanillo, about an hour away.