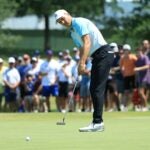 Though, if you think some of Jordan Spieth’s putting statistics from this season are alarming …

“Because he’s got the yips putting.”

With the PGA Championship this week, and Spieth among the favorites at Southern Hills, he’s a popular dissection. Haney, you may recall, was Tiger Woods’ coach for a stretch. And while there’s no actual measurement for the Y word, and Spieth and his camp have their own theories (more on that shortly), Haney’s putting data checks out. Haney also brought up that, at the RBC Heritage last month, Spieth finished 60th in the field in SG: Putting, at minus-2.545.

Of course, Spieth won the event. It’s here where Haney starts to wonder.

“And he has found ways to work around it,” he said on the podcast. “And sometimes he can work around it. This is the looking-at-the-hole thing, which he started doing again, by the way, on short putts. And he needs to do something.

“Jordan Spieth is pretty much the worst putter, or right there on the short list of the worst putters on the PGA Tour this year. What he did to win at Hilton Head — I think he finished like 60th in putting; like he was the worst putter in the field and won the tournament — that’s impossible. So if he was putting — ifs and buts were, I know, candy and nuts, I get the whole thing, but the way he’s hitting the ball, if he was putting like he did back in the day, I mean he’d be knocking at the door on No. 1. But that’s a big if. That’s a big if.”

Spieth, thank you very much, is aware. At last week’s Byron Nelson, he missed a 2-foot, 9-inch putt that proved costly — he finished one shot behind eventual winner K.H. Lee. Still, for the week, he was 36th in the field in SG: Putting, finishing on the plus side, at 1.449. And after the miss, he made testy 5-footers on 15 and 16.

Spieth also has a putting theory. Remember that just now, over the past year or so, he’s finally seeing daylight after a lengthy swing overhaul.

“Yeah, there was certainly a bit of — it’s not like I didn’t practice putting, but when you get a little off, sometimes you don’t necessarily recognize it if you’re so focused somewhere else, and I think just the little bit of neglect hurt,” he said Wednesday in his pre-PGA press conference.

“I put in good work, but it was going to be a little trial-and-error last week, and I’m glad that I gained on the field with a little bit of that. Then when it got to the weekend, there were some putts where I just put some strokes I wasn’t purely confident on like I have been before and hope to be again. But from those I learned a little bit. I missed a couple that I should have made and then I went and made a couple really nice sliders on the last five holes, and I really look at those, and I take those into this week because those were — I felt more pressure on those than any other putts throughout the week.

“It was definitely a better performance, and I have a good idea of what I need to be doing. It’s just now it’s about pushing that agenda like I have with the full swing, tee to-green. It’s hard to put a ton of focus into every single part all the time. I feel like I’m in a place now where I can take my foot off the gas a little bit. Not much but a little bit on the full swing, and shift it over, and that’s what we’ve been doing the last few weeks.”

Haney, however, isn’t a believer.

“And the thing about Jordan Spieth and his putting is he will be as positive as you could be,” he said on the podcast, which was released on Monday. “He will work hard, practice hard — he’ll probably figure something out. But whatever he figures out won’t last. Because one thing that happens is you see how things repeat just itself, over and over and over again. And it’s good putting, bad putting, good putting, bad putting, you know, figure something out, look at the hole, don’t look at the hole, you know, this grip, that grip, whatever it might be.”