Why is Ted Scott caddying for Scottie Scheffler? You better grab a tissue. 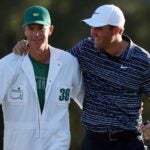 Scottie Scheffler and his caddie, Ted Scott, on Sunday after winning the Masters.

AUGUSTA, Ga. — Ted Scott, maybe a short wedge to the right of the first tee box at Augusta National, was crying late Sunday afternoon. The caddie for the newest Masters winner had his rationale.

“I guess the Masters champion was so I guess I should cry,” he said.

Scott was joking, and those around him laughed. It’s what he does, and it’s a big part of the reason why his man, Scottie Scheffler, is wearing green today. Scott keeps the mood light. No, his tears were for the question that’s been on at least a few minds since the former longtime looper for Bubba Watson came out of retirement last November and picked up Scheffler’s bag.

Earlier Sunday, Watson gave his side. He said he was struggling, and Watson encouraged a split. A short while later, Scott and Scheffler connected, and as Scott retold it all, the emotions of that conversation and ones that followed returned too.

“I had my kids pray about it,” he said. “It took a week, and they said, dad, we think you ought to do it. I said, well, we’ll pray about it for another week. They said, we definitely think you should do it.

“And that was the deciding factor. I didn’t choose it.”

And now Scott is on the bag for a player who’s won four of his past six events, is the world No. 1 and is now a Masters champ. A reporter asked him what’s the “it” that he has.

“And then secondly, he’s driven. You know, the guy’s wants to do well, he checks all the boxes, he practices hard after the round. You know, Monday, Tuesday, Wednesday, working and always trying to get better so he just wants to go out and play great golf. It’s a recipe for winning.”

And now, Scott’s booked himself for at least one more tournament.

“I guess I’ll have to keep working until next year so we’ll see what happens,” Scott said.