Why Bubba Watson deserves a spot on the Ryder Cup team 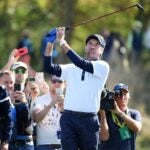 Bubba Watson hits a shot at the 2018 Ryder Cup in Paris.

The 43rd Ryder Cup is just around the corner, on Sept. 24-26 at Whistling Straits in Wisconsin. We know who the automatic qualifiers are for the U.S and who they likely will be for Europe, so now the fun begins as we wait to see which players land a spot via captain’s picks, which will be announced in the coming weeks. Yes, Jordan Spieth wasn’t an auto-qualifier, but let’s get real, Spieth will be on the U.S. team. But what about the other guys, the players who might not be slam-dunk picks? In the days leading up to the captain’s picks, our staffers make their case for some of those players.

Previous installments: The case for Scottie Scheffler | Should the Europeans call up the old guard, or go with new blood? | Don’t leave Daniel Berger off this U.S. team

Let’s be frank: given the lingering animosity between two of Team USA’s six automatic Ryder Cup qualifiers, Bryson DeChambeau and Brooks Koepka, what Team USA could really use is a heaping dose of positivity, enthusiasm and patriotism, and that’s why 42-year-old Tour veteran Bubba Watson deserves a pick.

Remember Bubba? He is the man who so loves the Ryder Cup that he pushed his ego aside back in 2016 and jumped at the chance to serve as a vice captain, despite being passed over for a pick by Davis Love III when Watson was ninth on the points list and ranked seventh in the world.

Watson, who has been on four Ryder Cup teams but never a winning one, was openly emotional when the U.S. triumphed at Hazeltine in 2016, even though he was relegated to the role of encourager and observer instead of active participant.

Watson relishes every chance he gets to don the stars and stripes in competition. Not only did he venture to Rio to compete in the 2016 Olympic Games when so many other high-profile players didn’t, he also appeared on-site in Toledo, Ohio, this week, to lend a helping hand to the American women’s Solheim Cup team.

And, okay, I’ll address the elephant in the room. Watson’s Ryder Cup record is far from ideal: 4-10-0. But hey, Rickie Fowler has also played in four Ryder Cups and his record is 3-7-6.

It also goes without saying that Watson is an asset when it comes to drives. He’s 9th in strokes gained: off the tee this season, and averages over 304 yards.

Watson has been open about his mental and physical struggles over the last few years, and has rebounded nicely this season, with five top 10s. At No. 33 on Team USA’s points list, to say he’s a long shot for a captain’s pick is a massive understatement. But in the metrics of heart, there’s no one I’d rather see get the nod.