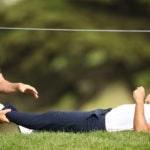 Brooks Koepka is treated by his physical therapist, Marc Wahl, on the 12th hole at TPC Harding Park on Friday.

Three times on the back nine at TPC Harding Park on Friday, the two-time defending champion laid on his back while receiving treatment on his left hip. Three times, he got up. Koepka birdied the 18th hole, shot a two-under 68 and is two shots behind leader Haotong Li after Friday’s second round.

“It’s fine,” Koepka said. “I woke up this morning, it was tight, and worked out and it got even tighter and then we loosened it up. It was a little tight when I was hitting balls on the range, but it’s nothing to be worried about. We’ll loosen it up again and it will be a lot better.”

Koepka said his surgically repaired left knee was not the focus of the treatment.

After his tee shot on the par-4 12th, Koepka went to the grass a few yards to the right of the tee box. His physical therapist, Marc Wahl, pulled at Koepka’s left leg, wiggled it and then helped him up. “Feels good. Much better,” Koepka said as he walked away.

Still not quite. Before his tee shot on 16, Koepka went to the grass again. Wahl repeated the first part of the treatment he performed on the 13th, then stretched the lower part of the leg out. Better.

On 18, after a drive in the bunker, Koepka knocked his approach to about seven feet and rolled in the birdie.

“I originally, where I really felt it was off 12 tee,” Koepka said. “It just, like, locked up, cramped, and I couldn’t really do anything with it. That one, the first one was all right. It definitely relieved some issue, I think.

“I think the one going into 16, where he yanked on my foot, I don’t know what Mark does, but it popped and it felt like it just kind of repositioned itself, and that’s when it felt a lot better.”