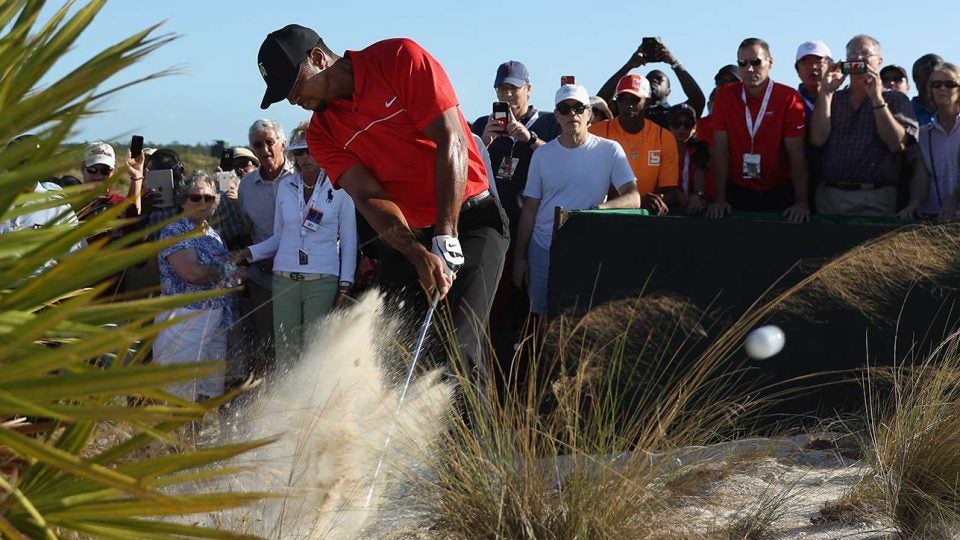 Tiger Woods hits out of a waste area during the 2016 Hero World Challenge.
Getty Images

Here’s a primer on the topic so you’re prepared the next time you run into these sandy situations.

Under Rule 12.2, you are allowed to remove loose impediments and movable obstructions, just as long as doing so doesn’t make the ball move. Removing loose impediments is a new rule that went into effect in 2019, as did this unplayable lie option when in the bunker (Rule 19.3b). However, before making a stroke while in the bunker, you are not allowed to deliberately touch the sand with your hand, a club or rake (or other object) to test the condition of the sand. And as usual, you are also not allowed to touch the sand with your club while making a practice swing or during the backswing of your stroke. If you do, it’s a two-stroke penalty.

Tournaments
Tour Confidential: Should Patrick Reed have been disqualified for his controversial rules infraction?

Don’t let your ball rolling into a waste area confuse you; for the most part it’s a pretty simple explanation of what to do next. Waste areas are unmaintained areas of the course, and if you are in one you are allowed to ground your club. You can also take practice swings in the waste area. However, the action of grounding your club and taking practice swings must not improve conditions affecting your stroke (Rule 8.1). This is what Reed was penalized for, after officials ruled that his practice swings brushed away sand behind his ball.

How to differentiate bunkers vs. waste areas

Bunkers are defined as often hollow areas of sand that are surrounded by a lip, wall or face of grass or soil. According to the Rules of Golf, “all other areas of sand on the course that are not inside the edge of a prepared area (such as deserts and other natural sand areas or areas sometimes referred to as waste areas).” It’s important to know the difference, as an error in misidentifying a waste area from a bunker can prove costly, just as it did for Dustin Johnson at the 2010 PGA Championship at Whistling Straits. If you have questions, check in with the pro shop before you start your round.

For more on these rules, check out the USGA rules hub here.