WATCH: Tiger Woods misses three-footer to go 1-down in The Match

Tiger Woods and Phil Mickelson each halved the first hole of The Match, and each missed the green at No. 2. While Mickelson made his up and down without issue, Woods stepped up to his three-footer for par and something surprising happened: he missed it.

As Woods was halfway to plucking the ball out of the hole, the ball caught the edge of the cup and spun out, sending Mickelson 1-up through two holes. Mickelson was as surprised as anyone. 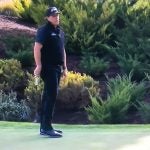 You may also like ‘That hurts the pocket’: Phil loses $200K to Tiger with missed birdie at 1st

“I was half a second away from giving him the putt because I’ve never seen him miss one of those,” Mickelson told his caddie (and brother) Tim on their walk off the next tee.

You can see the missed putt below.

Mickelson had missed a disappointing putt just a hole earlier: his nine-footer for birdie just slipped past the hole, costing him $200,000.