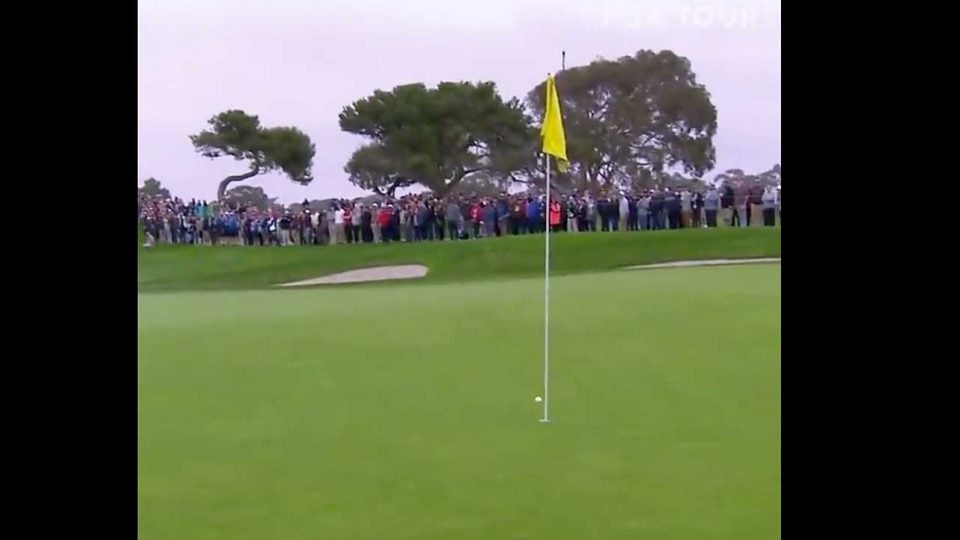 How the heck did that stay out?! You have to see this approach shot from Tiger Woods at the Farmers Insurance Open to believe it.
PGA Tour

Tiger Woods teed off on Sunday at Torrey Pines hoping to achieve something nobody had ever done.

Of course, on his mind was reaching 83 career PGA Tour wins by claiming his eighth Farmers Insurance Open, passing Sam Snead for the most victories ever on Tour. But Tiger might have achieved another all-time first before he even completed the front nine.

After bogeying the 1st hole to fall five back of then-leader Jon Rahm, Woods knew he had to start playing aggressively. He drilled his tee shot down the center of the fairway on the short par-4 2nd, putting himself 140 yards out from the pin. He lined up his approach shot, struck it, and then did something seemingly in defiance of the laws of physics. We’ll let you watch for yourself.

Somehow, the ball not only hit the pin but struck the bottom of the hole before popping back out.

What could have been a momentum-shifting eagle had suddenly turned into a wildly disappointing tap-in for birdie.

In seconds, social media was ablaze with disbelief.

The golf gods have a sick sense of humor pic.twitter.com/yy6mCm1buo

Surprised the hole didn’t laugh like a clown after it spit Tiger’s ball out. pic.twitter.com/HGYDdQgWFU

It might not have been the unforgettable moment he was expecting, but Sunday’s in-and-out on No. 2 at Torrey is one he surely won’t soon forget.