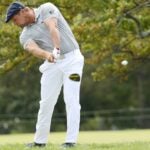 Bryson DeChambeau is onto the Round of 16 at the World Long Drive Championships.

Just a week removed from a successful week at the Ryder Cup, Bryson DeChambeau is making waves once again. This time, it’s at the World Long Drive Championship.

Although DeChambeau wasn’t expected to be much of a force against some of the longest hitters in golf, thus far he’s held his own. He’s already wracked up multiple 400-yard blasts and has battled through a strong headwind to advance to the fourth day of competition.

Check out below for all you need to know to watch DeChambeau compete on Friday.

How to watch World Long Drive Championships on Friday

Friday is the final day of competition at the World Long Drive Championships, and the schedule of events can be found here. DeChambeau will compete in the open division, which is scheduled to begin at 6:45 p.m. ET. The top eight finishers will advance to the quarterfinals, where they will be separated into two groups. The top two finishers in each group will advance to the semifinals. The top two competitors from the four-man semifinal will then advance to the final for a head-to-head match to determine the champion.

You can watch all the action on the PLDA Youtube page, which is running daily livestreams of the tournament.