Welcome to Wall-to-Wall Equipment, the Monday morning gear wrap-up in which GOLF equipment editor Jonathan Wall takes you through the latest trends, rumors and breaking news. This week, that includes Rory McIlroy’s wedge tweak for Pebble Beach, the return to something familiar for Justin Thomas, new Ping PLD putters and a common theme at the U.S. Open.

Missing the cut at the Memorial turned out to be a blessing in disguise for Rory McIlroy’s game, and quite possibly his chance at the U.S. Open as well. With a free weekend to prepare for the Canadian Open, McIlroy arrived at Hamilton Golf and Country Club and spent the early part of the week working with TaylorMade Tour rep Adrian Rietveld on his wedges.

Since he signed with TaylorMade midway through 2017, McIlroy has mostly relied on a four-wedge setup due to his length, but has, on occasion, opted for just three wedges with larger loft gaps. Most recently, his preferred setup was just three wedges until last week when his work with Rietveld revealed a need for “calculated distance control” to not only handle Hamilton but Pebble Beach. 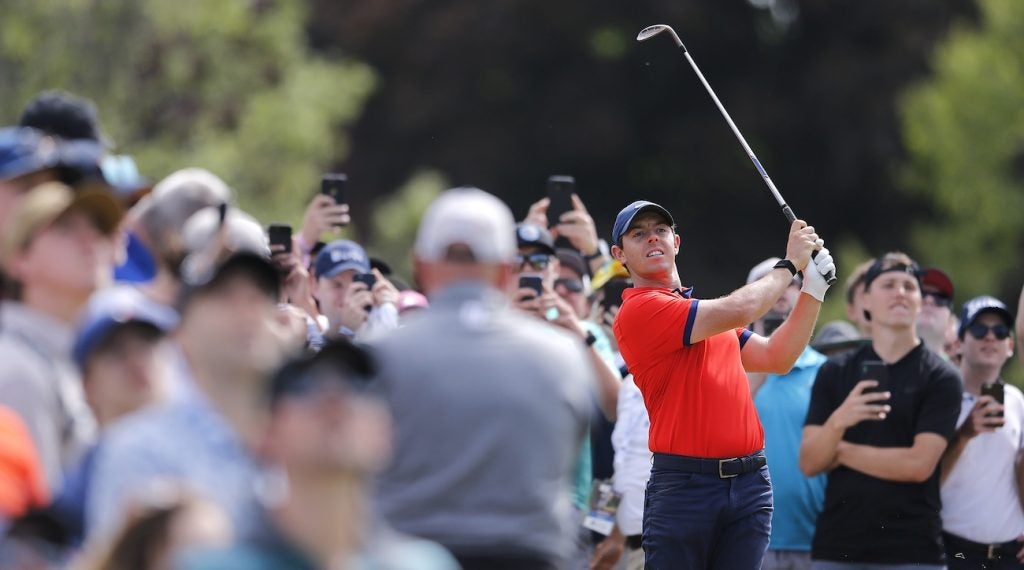 “I feel like with how short Pebble is you’re flying the ball for the most part,” he said, “but I think there is a lot of shots from sort of 120 to 150 [yards] at Pebble. Which if I drive it well and give myself those shots, you really need to take advantage of those, especially a U.S. Open where birdies are few and far between.

“It worked pretty well, the four-wedge setup. It is the plan to continue with that going into next week.”

McIlroy’s new setup worked to perfection in Canada. He ranked 5th in proximity to the hole (32 feet) and 6th in strokes gained: around-the-green — two statistical categories that keyed a strong week with the putter. With iron and wedge precision taking on greater importance at Pebble Beach, there’s a strong chance his four wedges could see a lot of use this week.

Making just his second start since returning to the course due to a wrist injury, Justin Thomas shook things up with the putter in Canada, replacing his Scotty Cameron X5 Flow Neck mallet with an Anser-style Newport 2 Timeless made from German Stainless Steel — the same head material Tiger Woods prefers with his Newport 2.

Scotty Cameron Tour rep Drew Page confirmed Thomas’ Newport 2 GSS has a head weight of 350 grams and happened to be a putter he’d never put in the usual rotation. Thomas liked the way the putter soled and set up to his eye at address. It also didn’t hurt that the GSS head produced a sound and feel he was accustomed to at impact.

Thomas has finished no worse than 47th on the PGA Tour in strokes gained: putting over the last two season, but 2019 has been a trying year on the greens for the 2017 PGA Championship winner, who currently ranks 100th in the statistical category and is now on his fourth putter this season.

Before the end of 2016, Thomas’ putter of choice was a Newport-style blade. But struggles with the flatstick led him to perform a similar shakeup, replacing the blade with a mallet. 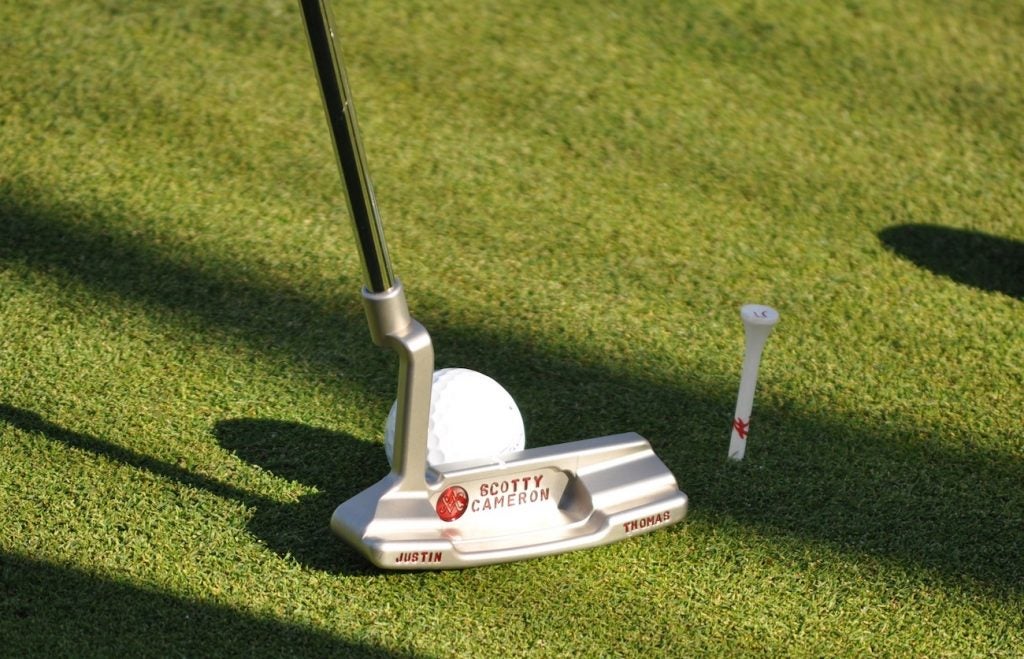 “[The mallet] was just better for my stroke in terms of the weight and having the toe hang where it still feels like a blade,” Thomas told me in 2017. “I tend to have a lot of toe rotation in my stroke, so minimizing that gives me more consistency.”

It’s not uncommon for lifelong blade users to revert to a familiar look and feel after trying something markedly different — like a mallet — when the putter goes cold. Dustin Johnson and Tiger Woods have bounced between a blade and mallet at different points in their career, with Woods returning to the Newport 2 GSS on a full-time basis after only a few months.

Thomas has enjoyed far more success than Woods with the mallet, winning his lone major with the X5 Flow Neck, and with a mixed week on the greens at Hamilton Golf and Country Club — Thomas ranked 68th in strokes gained: putting — it’s difficult to project where Thomas will go with the putter at Pebble Beach.

Players were recently given the chance to offer feedback on some of Tony Serrano’s latest Ping PLD creations. The 100-percent milled carbon steel heads were given a patina finish to speed up the rusting process, giving them a well-worn look that was warmly received.

The patina finish has been on several PLD models, including Anser, Anser 2, Tyne 4, B60 and Fetch. For the moment, the putters remain Tour-only offerings.

Prepping for the Open

Speaking of wedges, Paul Casey posted photos on his Instagram account of something that should be a common sight at Pebble Beach: Fresh grooves. More than almost any other major — outside of a baked-out Open Championship layout — the U.S. Open requires as much zip as possible to hold the putting surface, especially from the lush rough.

Casey received a fresh set of SM7’s from Vokey Tour rep Aaron Dill. Considering Vokey’s popularity on Tour, Dill will end up being the busiest rep on site at Pebble Beach as players work to dial in their wedges for the third major championship of the season.

See you at Pebble

Nate Lashley booked his spot in the field at Pebble Beach after making a minor tweak to his driver prior to sectional qualifying. The first time U.S. Open participant added approximately 3/4 of a degree to his Ping G410 LST driver to launch it higher. He also had 3 grams of glue added to the face to keep the spin rate the same while going up in loft.

Callaway staffers will once again have the opportunity to use the company’s Chrome Soft Truvis Stars & Stripes balls on the range at the U.S. Open. 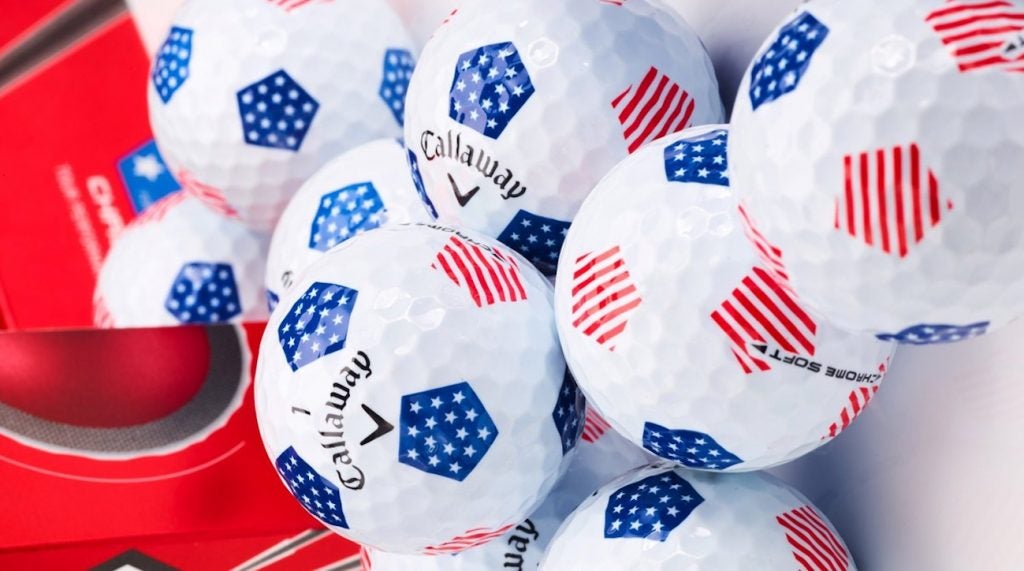 Players can practice with the balls, which feature Chrome Soft performance and a unique stars and strips pentagonal pattern on the ball. The pattern has been around since the early 2000s when Julian Morley first started adding the design to golf balls. It’s specifically designed to maximize the golfer’s view of the ball for better focus and visibility.