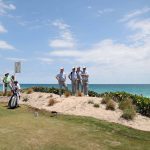 Team USA leads 7-5 after the first day at the Walker Cup.

JUNO BEACH, Fla. — Day one of the Walker Cup is in the books. Team USA leads 7-5 after the first two sessions, setting up what is sure to be an intense final day of matches at Seminole Golf Club tomorrow.

Here are from things to know from Saturday at Seminole.

Looking at the World Amateur Golf Ranking, the matchup between the U.S. and GB&I (Great Britain and Ireland) is heavily lopsided. The Americans have nine of the top 20 players in the world, while their opposition claims just one. But despite this seeming mismatch, the boys from across the pond came to play.

Through two sessions, GB&I finds themselves behind the Americans by just two points, far from the blowout many predicted coming into the week. Now, the pressure shifts to the Americans to assert themselves tomorrow on their home soil.

2. Strafaci is bouncing back

Just before his afternoon match with Ben Jones, Tyler Strafaci was scratched from the lineup and replaced by William Mouw. Strafaci has been dealing with a stomach bug that has plagued both teams this week, and the ailment was too much to overcome on Saturday.

As more details came to light, tournament officials announced Strafaci was taken to a local hospital via ambulance as a precautionary measure. Fortunately, Strafaci was back on the grounds at Seminole by day’s end, cheering on his teammates.

“It was tough,” Strafaci said. “I wanted to go out and compete. It’s what I’ve been preparing my whole life for. It wasn’t easy at all. Physically I just couldn’t have walked 18 holes today. I was just really out of it, and three IVs in, I feel much better now, so I’m ready for tomorrow.”

3. The stars were out

Seminole was full of stars on Saturday. Yes, golf stars, but other celebs as well.

This golf scribe spotted Larry Fitzgerald (a Seminole member) in the afternoon watching John Pak and Barclay Brown, and also picked out Greg Norman following one of the morning foursome matches.

Among the other marquee names in attendance Saturday were Lee Westwood, Jessica Korda, George W. Bush, Fred Ridley, Seth Waugh and Curtis Strange. Quite the cast of characters.

Cole Hammer is somewhat of a Walker Cup veteran at this point after playing on the victorious 2019 team, and he provided a veteran presence Saturday at Seminole. Hammer won both his matches on the day, earning two critical points for the American side. Expect to see the 20-year-old in both sessions tomorrow as Team USA vies for the Cup.

Saturday at the Walker Cup is a session of foursomes and a session of singles, and Sunday is more of the same. The only difference between the two days is that on day two, there are 10 singles matches in the afternoon, ensuring that all players participate in the session.